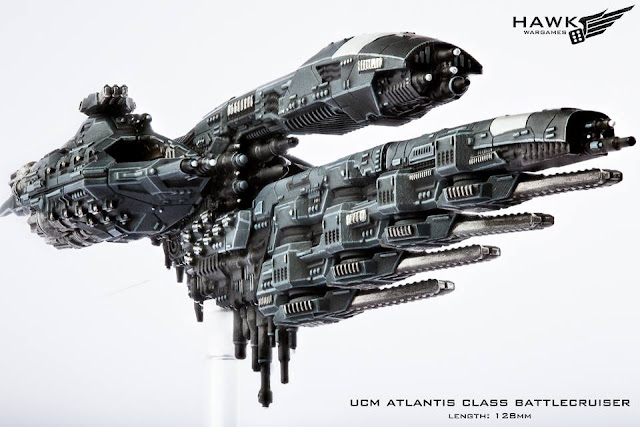 Here is the latest update from Hawk Wargames regarding their kickstarter.......Expect this kickstarter to start off tomorrow around 2pm GMT.


via Hawk Wargames
https://www.facebook.com/Hawk-Wargames-215887118516882/
It is under 24 hours until we hope to have launched our Kickstarter, and as a final update before we get going, we wanted to share some thoughts as well as a few slight tweaks to what we had planned before. These have come about, as we mentioned yesterday, from a mixture of the community's response to our newsletter with the proposed pledges and rewards, and conversations with some trusted industry colleagues:

1. Regarding the UCM Kickstarter Only Battlecruiser - this is now no longer going to be limited (in terms of the quantity that are available on the Kickstarter). However, due to the nature of what it is, it will be only available (as a reward) with the Captain and Admiral Pledge levels, and only from this Kickstarter Campaign.

2. Having mentioned the Admiral Pledge levels... After considerable conversation and feedback, we have decided to combine these into 1 pledge level (with a combined limit). If the Kickstarter goes even reasonably well, the value of the Rewards that people who back at this level will receive, will be completely worthwhile. On top of this value, is the Beta Access - this comes in 2 parts. The Beta Rules (signed by the team and sent before the proposed Test Days), and the Beta Test Day. The Test Day will be a great experience, but this is only a part of the rewards that a backer receives from this "Everything" Pledge.

3. Going back to Battlecruisers, we are happy to confirm that if we are successful in hitting our initial goal, then we are hoping to unlock Kickstarter Exclusive Battlecruisers to go along with each race that is on the Kickstarter. These will be available as Bolt-ons that can be added to any pledge.

4. Our focus is on the Faction specific Plastic Starter Fleets and the 2 Player Starter Set, because the aim of this Kickstarter is to ensure that we can launch Dropfleet Commander straight into plastic from the beginning. Hopefully, if it goes well, this will also launch along with the Shaltari and PHR in plastic too!

We are really excited about presenting many more of the models tomorrow on the Kickstarter, along with demonstrating the flexibility that we have endeavoured to create with both the game and also with how the sets have been designed. This flexibility is best shown by the options available from the Starter Fleet boxes: There are approximately 8-10 Cruiser variants (ships which will have rules) and 4-5 Frigate variants, for each race. More of this will be shown off visually tomorrow, on the Kickstarter. The plan is currently for a launch in the early Afternoon (UK time), but we will of course send a message out when the Campaign is up.

We will finish this short update with an image of the Kickstarter Exclusive Battlecruiser for the UCM (that we have had a number of discussions over). We always aimed to do our best in our plans for this Campaign, and we are grateful for all the support we have already received! We hope that you will continue in supporting us by making this Kickstarter a success. We look forward to seeing what Dropfleet Commander can achieve, both during the Kickstarter and beyond.