Details from This Week's White Dwarf 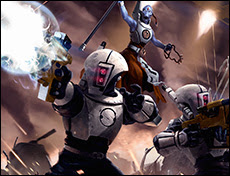 There is quite a a few releases coming this week from Games Workshop, and we have a few details for the them from the latest White Dwarf. The new Tau Commander, the datacards for both White Scars and Ravenguard, and much more and in the latest details.

New plastic Tau Commander, fully replaces Finecast one.
Lots of options on the new Commander.
Coldstar option has additional flight fins, different head, and different chest.
New plastic XV8 suits with new options available.
XV8 kit makes the Iridium Armor now, and the unit Shas'vre can take it.
Iridium suit build has a specific chest piece with an up-armored gorget added.
New XV8 kit uses the same locator plus as the Riptide, Ghostkeel, etc. but can be cut away for posability.
Ghostkeel Edition codex looks amazing.
Leaks about not needing a brand new codex for Tau are indeed true.
Datacards for Raven Guard and White Scars are the same types all other armies have received.
Datacards also contain Warlord Traits for Raven Guard and White Scars
Tau painting guide coming.
Vior'la decals being released, GW online only.
Battlesuit "primer" in the issue to give some history.
Aid from Azyr, Starborne Slaughter, The Tidewall Rises are next week's hints.
Can confirm two formations in the campaign book Kayuon via the White Dwarf images.
Both formations seem to be Space Marine generic (no love for Blood Angels and Dark Angels because of faction restrictions).
Raven Guard detachment type is in Kauyon.

Captain or Chaplain can be substituted for Sicarius, Cassius, Korsarro Khan, Vulkan He'stan, Shrike, Kantor, High Marshll Helbrecht (that is actually what it says), or Grimaldus.

Scout Support: Each scout sergeant can scout for another unit within 9".  The unit will get Ignores Cover.

Wayfinders: Other units may be led onto the field by one of the scout units.  Those units can also gain Outflank as a result.  They also gain Stealth on the turn they come in if within 9" of the unit that led them on when they come in.

Vanguard Veterans MUST have jump packs.

...On Target: Vanguard Veterans can charge on the turn they Deep Strike.  No scatter if Deep Strike within 9" of a Scout Squad.