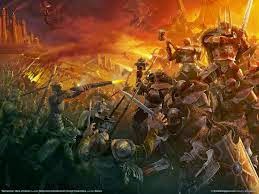 It is still a little ways out, but Warhammer 9th edition is what a lot of people are talking about. From the round base rumors, to skirmish sized games, and armies no longer supported, 9th edition has been on a series of up and down rumors and dramatic reactions to what may or may not happen.

Here are some rumors from over on Bols that are pointing towards a starter set box release of the "Forces of Light" vs Chaos release.


Please remember that these are rumors at this point.

via Larry Vela on Bols
http://www.belloflostsouls.net/2015/02/wfb-9th-starter-box-details.html
WFB 9th Box & Armies
The results of the End Times will be directly reflected in the armies included in 9th Edition
Boxed Set:

WFB 9th will kick off a new set of products that cover not only the new surviving factions, but new modular terrain pieces that support the game at all size levels and reflect the new “Post End-Times” world.
2/22/2015
Natfka
New Releases, News Headlines, Rumors, Warhammer Fantasy