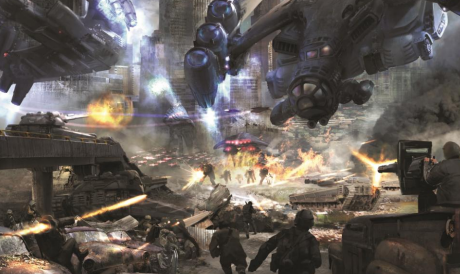 There has been a lot of talk about updates coming to Dropzone Commander, as well as the new Famous Commander models and standard command vehicle updates. The guys at Hawk Wargames love to talk about what is coming and discuss it with people they meet at conventions, and it shows their passion for the game, its integrity and balance.


Here are some of the insights that are being picked up upon. Look for these downloadable updates to the game coming very soon.


via a Menzies on Faeit 212 (his website-http://cadian512.blogspot.com/)
I had it on good authority (e.g.admin Hawk Simon who patrols the dropzone forums on behalf of hawk wargames) that Freeriders are getting a slight nerf, they're rules would be modified so their sticky mines are now L-2, and there will be a yet-to-be-confirmed points increase by means of a downloadable update, to be released in the next 2 weeks.

via Rolling Hot- A Dropzone Podcast - not everything they talked about from the LVO is in this. So don't forget to check their site out as well. This is a recap of what was said.
https://dzcrollinghot.wordpress.com/

Now for rumors, if you can call them that, as these are straight out of Dave and Simon’s mouths, though add some salt as this is from memory.

-The UCM Falcon and Shaltari Thunderbird will see a point decrease and gain Evasion 2.
-The PHR Menchit will see a point decrease, and range increase, and maybe shots increase?
-Shaltari Warspear will get a second DP.
-The Scourge Harbringer will be utilized by more than the current walkers. I am not sure if this alludes just to the Oppressor (the new Command unit) or perhaps more other things
-Resistance Freeriders will change, but this has been mentioned on the forums. To recap, they’ll see a point increase and L2 on their mines.
-Shaltari Dreamsnare will be going up in points.

The Resistance will be in Dropfleet Commander, but as a scenario pack like the bunkers, ODL, and monorail. These Resistance forces will be those that fled and have been randomly jumping about the galaxy, but with the beacons back on, they are returning to the Cradle worlds. Some may be military craft, some will not.


Dave and Simon refuse to comment on whether the Scourge are running from something else or not – they shut that convo down right quick. They stuck to their eight factions is best mantra, but they did say DZC will continue for a long time. In their words, it’ll be their 40K. They have DFC on the horizon and they mentioned a third core game in the universe. No details on it, but they did say three core games.
2/24/2015
Natfka
Dropfleet Commander, Dropzone Commander, Hawk Wargames, News Headlines, Rumors