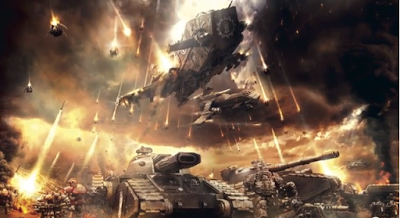 There has been some vague talk about Games Workshop producing 30k plastic mini's in both what seems to be a possible starter set, and additional models. Its quite possible that since Forgeworld is doing well with this, that GW will be stepping in on some product? or perhaps even a Great Crusade setting. There is a lot that could be done with either setting.

These rumors come from vague hints from Hastings over on Warseer over the weekend. For a bit they were largely getting ignored, and even were moved to general topics by warseer admin who deemed this not really noteworthy for the thread to continue. However, it has now been resurrected back onto the rumor pages. I had seen this over the weekend, and was watching it in case something more solid appeared.

While nothing solid appeared, I thought it worth mentioning, and have added a bit of information that may or may not be connected below.


via Warseer- Conversation regarding GW taking over 30k


my_name_is_tudor
More Horus Heresy stuff? How dull. They've already done that.
75hastings69
Oh no they haven't
Think outside the box a little.......... or maybe inside the box
BasetheRuinAs in think inside the brand new 30k starter box?
75hastings69
: )


Harry also had this to say from an earlier and different post about something big coming in May. Here is a link to the article if you want to read more. http://natfka.blogspot.com/2015/02/


You are laughing now. This will cause a ***** storm of similar proportions on the 40K boards to the one we have been enjoying on the fantasy side.

This may or may not be connected with what is going on, but I figured this was a good place to put it for now.
via an anonymous reader on Faeit 212


It was mentioned a new "flag ship" store was opening in London (there are flyers to confirm the new store).
But more importantly he said there was a rumour, in the company, that this store would be stocking FW products.

So what do you think? Could GW step in and support some of the Horus Heresy by creating a new starter box set, or additional models? I believe this would be unprecedented, but would be a way to expand the ranges for Games Workshop and possibly find additional profits.