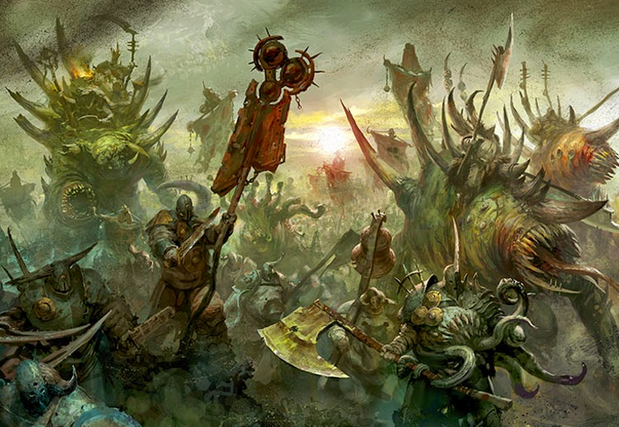 This is a hard set to dig into, and its not completely understood whether this is a collection of rumors, or the sources own information about what is going to be happening this summer when the new edition hits.


Please take this with a little extra salt, and remember that these are rumors.

via Ikitlagriffe on Warseer
I summarized here everything I lately collected, and you seem to ignore or misinterpret. I am not paid by anyone to deceive you. I’m the most confident about aesthetic and visual questions, and about skaven stuff. Friendly.

Anyone who wants to know what there is in V9 has to imagine that this is the V8 ; it will be 90% right.

Rule changes have been made to stabilize and streamline some points, particularly at the formation units and their interaction with the characters, from what I was told.

About the armies that follow (“factions” J ) : they won’t be "bundling" of existing armies, but almost all new prospects. These are all new units with an aesthetic different from what we knew and new historic lines, new characters, we could almost consider some of them as new “races”. Nevertheless, each new release will be integrated into one or more pre-existent conventional armies. Some new units, for example, will just belong to “Forces of Order” or “Forces of Destruction”. No stress. You can keep your old collection (all your collection), and enjoy with it.

V9 will not be just one book, but a box with other things such as a volume focused on two types of battles : clashes "lord of battles "in standard format creating links between games, and smaller battles with “pre-organised” armies (that's what you took for a skirmish game I think).

About this “skirmish” game: I’m not completely sure about that : this has taken many different forms over the settings but it seems to be one of the most tested aspects in recent years by GW teams. It is not intended to be the main way to play Battle. Currently, forces will be selected from a list of predefined choices, more restrained that the currents army books, without worrying percentage points, points themselves will not so important anymore: it will be destabilizing for the old players, but the number of miniatures contained in a unit or its point value could be no longer as important as before in this system. Players would have the choice to comply or not the points. A book will summarize the possible choices for all existing armies. It was thought just for fun, and almost all special rules of existing models could be ignored because of it.

About round bases : there would be a misunderstanding at this level too. Some Warhammer miniatures will indeed now sold on round bases, but it’s the consequence of some simplified rules and not a transition to a new system, or 40k-like, or I don’t know what. No link with the new “skirmish game”. The elements attached to units will be on round base (as skaven regimental weapons or dark elves cauldron of blood for example, but also characters according to pictures I’ve seen), are no longer joined the unit but move next to, and may have a round or oval base. But if your old version is not on a round base, you can still play with, no problem.

About “waiting” armies : for the bretonnians, there is a book that will follow this year, but perhaps we can’t call this “army book” because it will be very different from what you had until then. It will be closer from the End Times books recently issued. There will be in it new units, which could join the Forces of Order, and very close from a Bretonnian army, but not only. For the Skavens, the amount of new stuff approaching is just unprecedented (although I have no visibility on dates). It won’t be really “skavens” as we knew them, but a sort of evolution type very nice and inspired. No merger with Chaos for them (anyway, no merger for anyone!). About Beastmen, they don’t have directly the same processing, to the best of my knowledge, but no doubt they will benefit from a wealth of new opportunities for chaos. I had no evidence that it’s matter of squatting them, nor nobody else.

The quantity of new stuff for Battle will be just incredible, if all that is planed comes out. New releases will be essentially new entries, unique monsters, characters, and elite units of 2 to 5 figures. This will change progressively the overall appearance of the armies, with fewer miniatures (but larger). There will always be a place for large infantry units; however I don’t have a precise view of the new rules, that's why I can’t say if it will always be interesting to play big infantry units, or not.
2/18/2015
Natfka
Rumors, Warhammer Fantasy