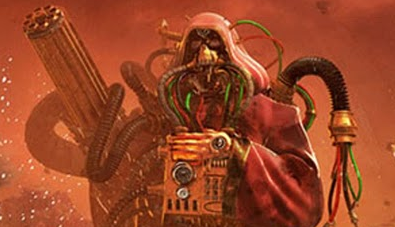 Once again we are getting Legion Cybernetica units in the rumors. While I dont know if there will be a second adeptus mechanicus codex release beyond the Skitarii, this bit seems to be focused on just that. These rumors seem to be based on old rogue trader rules.

via Larry Vela on Bols
http://www.belloflostsouls.net/2015/02/adeptus-mechanicus-early-rules-whispers.html
From the Birds in the Trees:

Some early tidbits on Mechanicus units:
– Legion Cybernetica units have a certain quick and easy “programming” game mechanic built into them.

– Examples listed were only being able to define certain aspects of moving and/or shoointing directly, with some aspects being determined either in a pre-defined manner, or randomly.  thus some of your Ad-mech units may not be “wholly” under your direct player control.

– There will however be certain pieced of wargiesr and or “controller” units which will get around these limitations.