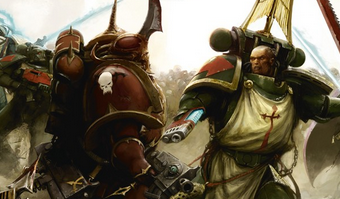 Rumors of what is coming over the next 6 months have been dominated by the latest whispering from Hastings revealing several mini-dex's and stand alone box set games. One thing that many people have forgotten, simply because its been a while, is that a campaign has been rumored as well for the upcoming summer months.


Here is the latest talk from nightfury on what lies ahead. Please remember that these are rumors.

via nightfury from the Faeit 212 comment section. Here is a link to the rest of comment (since this is only part of his comments.
http://natfka.blogspot.com/2015/02/horus-heresy-and-assassin-stand-alone.html

the only thing i can confirm for 40k is a new imperial supplement. codex but i haven't been told one way or the other if it will be called skitarri.

Here is a previous comments on the next campaign
Nightfury from the Faeit 212 Comment Section
2015 will be the year of supplements and campaigns. Dark angels will almost certainly feature in the next campaign which i heard quite possibly is called DarkStorm