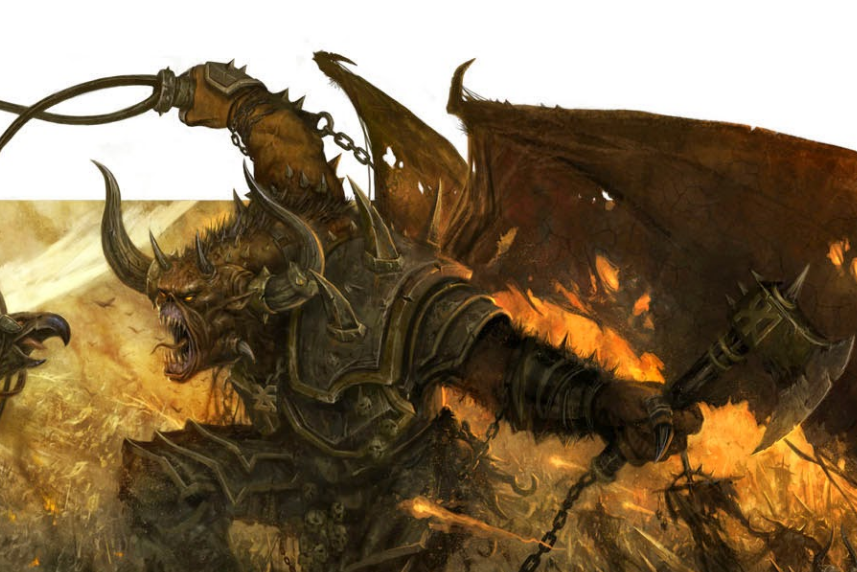 There are two new images being leaked that look they are from the next Endtimes book. The first of the two show off one of the new Blood Thirsters and some of the new units. We had some of these reported towards the end of January, and you can check out the links below to read previous rumors on these. To top it off, we have a few comments from one of our sources on the new images.

via an anonymos source on Faeit 212
The guys with the red skin in those pictures are Wrathmongers  that you had reported before
http://natfka.blogspot.com/2015/01/endtimes-archaon-new-models.html
There is one skullreaper in the bottom left hand corner, and the Blood Thirster is the Reaver of the Bloody Path and costs 500pts to field.

Skullreapers- twohanded weapons and chaos armour- come in at 40pts, and a can take a champion for 10pts. Eye of the Gods and Marke of Khorne are its special rules. Their weapons grant +1strength are magical attacks and gain the extra attack special rule. They have a 5+ unit size

Wrathmonger -wrath flails and chaos armour- Is 55pts each and can also take a champion. Eye of the Gods and Marks of Khorne come on both models and champion upgrades are going to cost 10pts each. The flails give +1 strength in the first round of close combat and had other rules I dont remember. Unit size of 5+