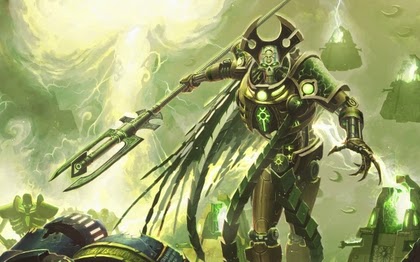 We have heard very little about a new Necron codex which is supposed to be released on January 31st. So when this appeared in the comment section earlier, it was worth repeating.

Take them for what they are worth, and remember that these should be considered rumors at this point. Please add some  extra salt with these.

Update: Because of how they were posted and some information coming in from other sources, please give these a rating of **.

via Danboy Jack in the Comment sections
Necron rumors I heard are pretty dire, shop worker who is a close friend of mine got this info while he was up hq for some training purposes last week.

Gauss will now on a roll of a six be double strength against vehicles so rifles str8, the immortal ones str 10 instead of auto glancing.

the stand back up rule is gone now all necrons have a 5+ invuln save made better by a res orb by +1 on troops and +2 on characters because they have removed the 3+ invuln item res orbs 5pts dearer.

He also saw a change/notes for both flayed ones and scarabs but didn't have time to read them properly other than scarabs do two things on a 5 and a 6 now. I'm guessing an armour point gone on only a 5 now and maybe a glance on a 6? That's speculation on my part.

Please i'm just repeating what i was told today he's a bit of a joker my mate but he really was up there last week as some other guy was covering the shop.
1/08/2015
Natfka
40k, 7th Edition, Necrons, News Headlines, Rumors, Warhammer 40k