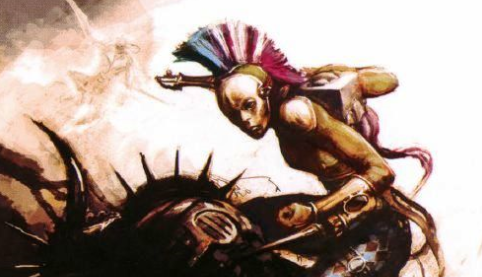 Of course there is more, lets take a look at the rules for next week's Harlequin Troupes.

Please remember that these are rumors, leaks from next week's White Dwarf. Early information like this must be considered to be rumors until officially announced.

Once again I removed the points, but a squad of five is just under a hundred points. I am also assuming that since the squad number can get up to 12, that the transport either carries 6 or 12 models depending on how large this Starweaver is.

via an anonymous source on Faeit 212
Unit of harlequin troupes are 4 Players and a Troupe Master according to next week's White Dwarf.

Upgrades are a harlequin's embrace-S: user AP- melee embrace of death gives d3 hammer of wrath attacks at S6, harlequins kiss, and harlequins caress. Any model can upgrade
The Troupe Master can take one item from the Enigmas of the Black Library and can select a Starweaver as a dedicated transport.
1/23/2015
Natfka
40k, 7th Edition, Eldar, Harlequins, New Releases, News Headlines, Rumors, Warhammer 40k