Bloodthirster Release, and More on a CSM Supplement for March 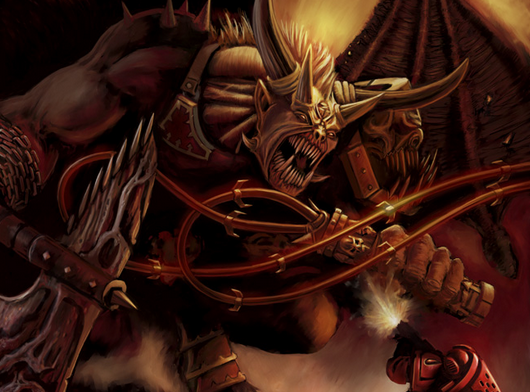 The Chaos Space Marine "Khorne" supplement that was mentioned earlier over the weekend has some more information coming in from various places. Of course there are conflicting rumors as normal, but that gives us a heads up that it does look like we will be seeing a supplement most likely towards the end of March. This could very well be timed with a campaign of some sort.

via Steve the Warboss
LATE MAR
CSM Suppliment
@CSM
There are rumors for an khorne theme suppliment in march, maybe the first with new profiles. The release of an new Codex in the summer is still possible

via Sad Panda on Dakka
In the last week of March, GW will release a Codex for Khorne Warbands/Hordes.

It is a one-week release with no new miniatures released for this new codex as such (but Zerkers, in all their old miniatures-glory, are actually in the Codex, no WD spin-offs).

The main purpose of this khorne codex is to ride in the slipstream of End Times 5, which will be released earlier in march, with the "headline"-release of the new Bloodthirster (builds 3 variants).

There is no "main" Codex CSM in 2015. There are no nurgle, tzeentch, etc. equivalents to this khorne one planned (yet), as it's mostly an End Times add-on to make the new Bloodthirster with all its variants work in 40K.

Darnok's response to this.
this one is spot on, as far as I know.

More via Darnok
One of my very reliable birdies told me to not expect a new CSM codex, but only a supplement. And while it is centered around Khorne (plus at least one new unit and new models in plastic), it is not about a Legion, but a renegade warband. This is a contradiction to the rumour in the OP by Steve the Warboss, and only one set of those rumours can be correct in the end.


As far as I know there is only the new Bloodthirster kit coming. I have no info when (or even if) the others will follow.
1/12/2015
Natfka
40k, 7th Edition, Chaos Space Marines, News Headlines, Rumors, Warhammer 40k