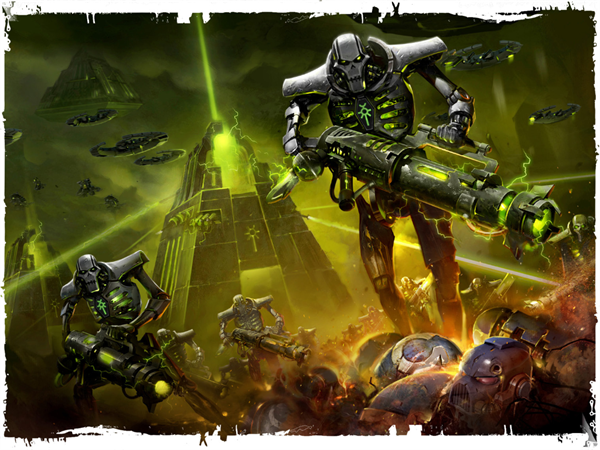 Earlier we had the powers of the C'tan. That left lots of questions about many things, like stats, points, powers, of which some are being answered as we get a closer look at the C'tan from the new Necron Codex.


the images above are from the sample images of the new Necron Codex sample pics on the Black Library.

Please remember that these are rumors until we get an official release or leaked images. This source has an excellent track record, and has reportedly has seen the codex. The powers of the C'tan are listed here.
http://natfka.blogspot.com/2015/01/necrons-powers-of-ctan.html

via an anonymous source on Faeit 212
The C'tan are not generalized into one generic unit like some people are concerned. Each gets its own entry and costs around the same point costs of a Land Raider, with the Transcendent costing an extra 10pts which also carries with it an extra wound giving it a 5 wounds. I would of expected a higher toughness, but  S7 and T7 is all around. Transcendent has an additional Strength.

Powers of the C'tan work like this; Pick your target and then roll for power.

All of them share some powers of eternal warrior, and fearless, Immune to natural law- ignoring terrain, and Necrodermis- 4++ and exploding on death-any models within d6" suffer S4 AP1 hits.

Deceiver- hit and run, Dread-enemy units within 12" -2 leadership, and Grand Illusion- after scouts redeploy d3 units within 12"and the deceiver through normal deployment or put in reserves.