The Words of Faeit: Purifiers 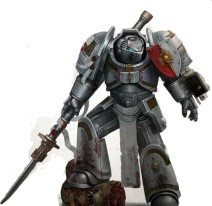 The Words of Faeit is a weekly post, dedicated to my thoughts on the strategy and tactical side of the game. They are not to be written in stone as "No plan of operations extends with certainty beyond the first encounter with the enemy's main strength" (or "no plan survives contact with the enemy"). Quoted from Helmuth von Moltke.

What I like about Purifiers is that the standard anti-tank gunfire is not going to do enough damage to you. This means lists that rely upon things like razor spam, or other single anti-tank fire are not going to be able to do enough damage to you on a round by round basis. Example... meaning a good tactical player will keep cover with his purifiers in all but the most dire or accidental situations. So long range firepower, even in mass will only slowly be able to start reducing the numbers of purifiers on the table, but not by enough to save them.

For a dedicated Purifier Army list, numbers are not on your side. So what I fear is armies that do not care about cover saves (strong anti-infantry) and provides a torrent of firepower on the field with lots of bodies. Here tactics will have to come into play, as Purifiers really can drop down a mess of firepower on anything that dares to come in range. In fact, Purifiers will for the most part, out shoot anything that gets close to you.

My Purifier squads are being equipped as the following.
Knight of the Flame- Nemesis Daemonhammer
Purifiers (4)- Psycannon
Purifiers (5)- Nemesis Force Halbreds

at least one or two of these units are fitted with psybolt ammo as points allow.

Another thing to be watchful for, are close combat super beasts. Asdrubael Vect, Mephiston, Swarmlord, etc. These monstrosities in close combat will make short work of even a full 10 man unit. You must take care to unload upon these guys before they assault.

Some facts, options and tricks:

Psybolt ammunition:
while not as point effective as in strike squads (6 models have storm bolters vs 8 in strike squads), giving one or two untis the extra punch can help turn the tide, and turn those to wound rolls from a 4+ to a 3+.

Combat Squads:
It must be said the option of combat squads greatly enhances the flexibility of this unit. Most of you are probably used to these things, but if you are like me and play mostly non-marine armies, combat squads add in a whole new dimension for deployment and tactical advantages.

Fearless:
This is one of those things that defies many of the ways I play other armies. I find leaderships to be a severe weakness in many armies on the tabletop, even Grey Knights (sorry paladins). For the most part I enjoy taking advantage of this with my Imperial Guard, and even my Dark Eldar to a different extent. Purifiers as a troop choice, negate this completely.

Grand Strategy:
Having an issue with getting your purifiers into range, simply give them scout with Grand Strategy. This gives your rhino transport the ability to move 12"s forward during your scout move. Make sure you deploy as well, so that you can get off your psycannons as a heavy 4 round 1. With the Scout USR there is nowhere on the table top you are not going to be able to reach with your 24" psycannons.

Elite Slots:
One of the hard things about Grey Knights is the wealth of strong units in the elite slots. Taking purifiers as troops opens that up, and suddenly your entire army is an elite strikeforce. This is where other options like grenade carrying techmarines or venerable dreads come onto the table top. (assassins too).

Psyocculum
This interesting device is now making my lists. You get it from a Ordo Hereticus Inquisitor, and attach him to a unit that at least has psybolt ammunition alongside your psycannons. Many players use the vast array of psychic powers as a punch to the face of the enemy, the psyocculum takes care of that in a unique way. If a model in your unit has one, and is firing at any psyker or unit that has one in it, your units ballistic skill is increased to 10.  For those that do not know, that means you hit on a 2+ with a re-roll of a 2+ to hit for every shot taken. Thanks Madcowcrazy for mentioning this piece of wargear.

Techmarines:
Nowhere in other marine codex's does the techmarine shine like it does in the Grey Knight Codex. They can carry grenades and add servo skulls to your list. Here is an excellent way to enhance your purifiers when psychic hoods are nearby. With the free elite slots, taking these game changing characters and attaching to a unit of purifiers, can make all the difference when advancing into close combat.

Simple Duality:
Purifiers are an amazing piece of duality with the weapons and options you can throw down with them. While people tend to look at rending as unreliable, it really is not when you are throwing down 16 psycannon shots. You will rend, and rend alot. Purifiers are able to take down light or heavy armour with devastating effect. Monstrous creatures suffer under the barrage of wounds and rending thrown their way, and finally infantry. The unit laid out above sitting still can throw down 16 S7 rending psycannon shots and 12 S5 storm bolter rounds. 28 shots. 20 if you are on the move. Did I forget to mention they rock in close combat?

Close Combat:
Need 5 guys to take down those 20+ gaunts? Yep, these are the guys for the job. With Cleansing Flame massed hordes are not such a bad thing to face down. A dreadnaught incoming in at you? Well, hammerhand and a nemesis daemonhammer gives you S10 hits in close combat. Even with those extra close combat psychic powers, you cannot forget that half of the unit strikes at I6 with force weapons.

Grey Knight Purifiers are a strong unit, with so much versitility that I have fallen for the unit. There is a 150pt tax that you must pay for to use these units as troops, but that is the price you pay. I currently have 4 full 10 man squads of Purifiers painted and ready for to rock. Will I add to it? Probably, I can't see me fielding 6 full squads, but you never know.