Rules of Our Game: Skimmers and Saint Celestine 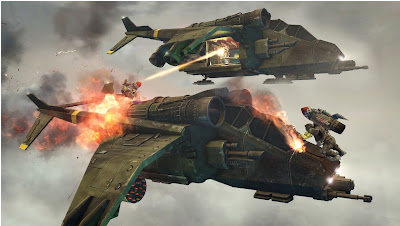 This weeks Rules of Our Game will take two questions into account. One of which is near and dear to me, since I use Vendettas, the other an email question from a reader.

Here are the two Questions:
Can a skimmer (ie Vendetta/ Valkyrie) move onto the table only moving 6" fully getting its base onto the tabletop, while leaving its tail section overhanging the table edge?

This comes from David
(I do not use full names or Internet names unless specifically given permission. Site policy)
Saint Celestine (SOB) deep strikes, mishaps and is removed from play. Her special rule is if she dies as a causality, she can come back the next turn on a 4+. Does she reappear on the spot, what if she scatters off table: re-deepstrike upon return, or is she just dead because she never arrived and thus didn't die as a causality?

The Rules of Our Game is a weekly post about rules questions that come up. I run across tons of rules questions each week, and I think almost every person in our hobby should keep an eye out for things like these. It helps us when we finally come across such problems or weak spots in the rules of the game. Comments and "Your Wrong!" are very appreciated with this series, as navigating the rules of our game can be quite treacherous.

Saint Celestine
Every time Celestine is removed as a casualty, place a counter to mark the spot where she "died".  Roll a D6 at the start of each of your subsequent turns. If the result is a 4+, place her within 1" of the counter with D3 wounds restored. If Celestine would be placed within 1" of another model, move her by the minimum possible distance, so that she is no longer within 1".

First off, lets answer the deep striking mishap. A deep strike mishap is not a removed from play result. If you roll a 1 or a 2 on a mishap, the unit is destroyed. So in this case you would follow her rules for being removed as a casualty, and she comes back onto the table on a 4+.  If she scatters off the table, place your marker where she scattered off the table, or where she had scattered onto impassible terrain.

There are things that would remove her from play, and hence stop her from resurrecting. A shattershard for instance "removes from play", so no resurrection. Other things like warp rift, uses "removed as a casualty" so resurrection is possible.


Skimmers:
This one has been around for some time, and it always seem there is some player at the local watering hole, that either ignores it, or doesn't know. So lets set this one straight.

Here are the faq rulings that matter:
Q: What part of a skimmer on a large oval flying base is used to determine if it is in/on terrain or if it is on friendly or enemy models? (p71)
A: Just the base itself.

Note that this is only regards to terrain and other models. This has nothing to do with being completely on the board. So when playing on those tall bases like the Storm Raven or the Valkyrie, once on the table, use the base for determining whether or not you are in a legal position.

Q: What happens when a unit arrives from reserves but is unable to completely move onto the board? (p94)
A: The unit is destroyed and removed from play.

This generally means that a Vendetta if held in reserve, must move over 6" in order to get onto the table. Now in friendly games you would just remind your opponent, I have even done so in tournament scenarios. Otherwise a player that moved on only 6" and is overhanging the board edge, is destroyed.
10/06/2011
Natfka
Imperial Guard, Rules of Our Game, Sisters of Battle