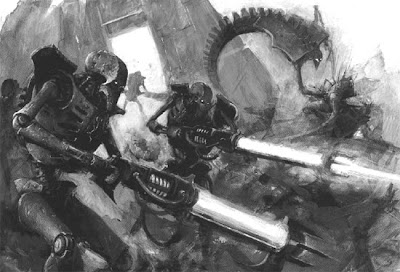 Necron rumors have been a hard thing to get with the rumor lockdown. Today I found something interesting over on another site, that talks about a new Necron shooting attack that is like no other in the game.

First off, the rumor comes via Tastytaste over on BoK. He specifically mentions that this rumor he has been holding onto since it seems at first glance a game breaking power. It is a rumor though, and rumors often come from early playtests or ideas. So I figured I would post up on it. If there are guns like this around the 40k table within a month, Necrons are about to make a big splash.

Please remember that rumors are rumors, and salt is needed until we get the codex in hand. Also, Tastytaste wrote the article, and there is more of it on his blog, so head on over there and check it out as well.

via Tastytaste
Rumor has it that a new Necron shooting attack can cause large swaths of your opponents army in a new interesting way. How it works is simple…
1.Necron Shoots Unit
2.Necron Hits Unit
3.Necron player allocates where the wound will be (how this is worded I have no idea)
4.All identical models to the one just shot are now hit
5.Roll to wound all models that are identical
6.Make armor saves were applicable


Here is the other way this weapon could work.
1.Necron Shoots Unit
2.Necron Hits Unit
3.Even though I only hit once I roll to wound every model in that unit.
4.Opponent makes armor saves where applicable

Now this doesn’t sound as scary as the first example, but it is basically GK Cleansing Fire power for Necrons. This version also fits in with chatter about multiple weapons that deal with horde armies.

Enter highly speculative realm that shouldn’t be taken as facts.
My fear though is that both these rumors are true. Here is a way it could potential work. One type of Necron gets the lesser version of this has this weapon. Another Necron lets say a Special Character gets the power to strike at all identical models army wide. I have a feeling that either way this weapon will be short-range, one shot, low str, and no ap value otherwise we are looking at some game breaking territory.

At least one of these rumors should happen which one though…