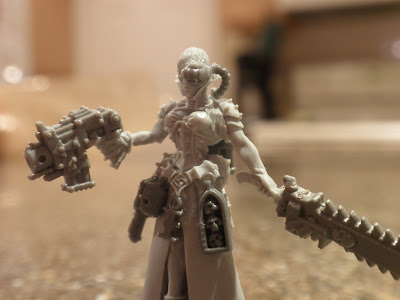 It was time to make my Ordo Hereticus Inquisitor. I had looked at the models online that were available and decided that I did not like what I found, so it was time to start looking. It did not take long to find the perfect model, the Lhamaean was exactly the pose and look I wanted. That left some work ahead for me, as I needed to do some customizations.

First off the long pony tail and top not on the hair had to go. It was attached in far too many places, and took the most work. I also had to cut off the weapons, and a lot of the braids/ top not. I needed to find a suitable (big ass) chainsword as well as a small enough bolt pistol that I liked. I took some Grey Knight bits to get the Inquisition symbol and some misc stuff to hang from her belt.

Now I want her with a Psyocculum, which according to the codex is a visor with an arcane assembly of mystically treated lenses, image enhancement circuitry and low light amplifiers. It allows the bearer to track down rogue psykers by their psychic emanations. It can be modified into a targeting device that allows for uncannily accurate firepower against pskyers and those enemies foolish to shield them.

The psyocculum is a piece shaved off of a devastator helm, and a wire off the head of a grey knight head. her backpack again comes from the Grey Knight sprues.

Basically I needed something over at least one of her eyes with a wire attached to it. Its cool, it allows the bearer and the unit to shoot at a psyker, or a unit containing a psyker with a ballistic skill of 10.

So the project is getting closer. I have a few touch ups to do, but for the most part I am very happy with the way she turned out. I will hopefully be painting her tomorrow.

The one thing I have to comment on, is how easy it was to do what would otherwise be an extremly hard project in customizing this model. The long pony tail would of been impossible if were not for how easy it is to work with the new finecast models. 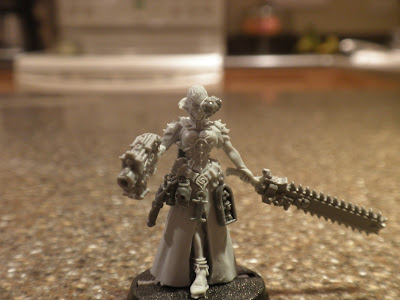 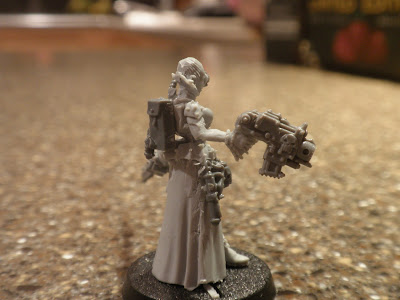 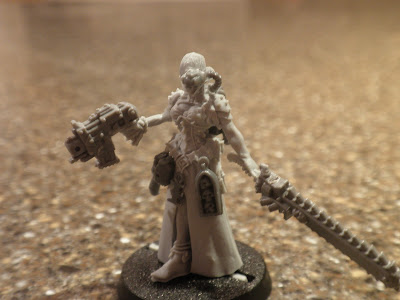