Rules of Our Game: Gate of Infinity 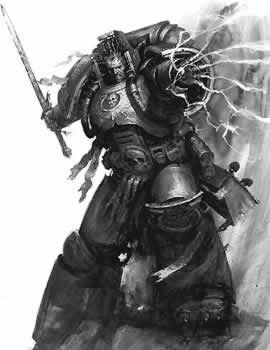 Two sides are locked in a heated close combat, the marines are going to lose. The librarian looks over and sees a clear spot of terrain and declares he using Gate of Infinity to teleport there. Can this be done?

Rules of Our Game is a weekly post regarding rules problems. I run across tons of rules questions each week, and I think almost every person in our hobby should keep an eye out for things like these. It helps us when we finally come across such problems or weak spots in the rules of the game. Comments and "Your Wrong!" are very appreciated with this series, as navigating the rules of our game can be quite treacherous.

Gate of Infinity
This power is used at the beginning of the librarian's movement phase. The Librarian, and any unit he is with, are removed from the tabletop and immediately placed back together anywhere within 24" using the deep strike rules. If the librarian travels alone, there is no risk, but if he takes a unit with him, there is a chance something will go wrong. If the deep strike attempt scatters and a double is rolled, one member of the unit, chosen by the controlling player, is claimed by the warp and removed as a casualty.

2. Gate of Infinity is not a deep strike, but uses the deep strike rules for placement on the table. It is not movement, so yes you can gate out of close combat.

3. It does not matter if deep striking is movement, because the rule for the power states that the librarian and unit are removed from the table top and then placed on the table using the deep strike rules.

4. The rule set is permissive, since it does not say you can teleport out of close combat (like the necron ability) you cannot.

This one I beleive truly falls into that grey area of the rules. I really think it could go either way. In friendly games I have no problems having someone use this power to move out of close combat. In a tournament, it is a good one to question. It's rules questions like this that make playing some units very annoying and a pain in the butt to use.

Gating out of a transport, there is the additional problem
The power states that the librarian is removed from the tabletop. If he is in a transport, is he considered to be on the tabletop?

I am hoping that the readers here might just be able to close the gap on this one. I lean towards the "No you cannot Gate out of close combat". However, I think this is one of the tougher ones in the game. Hopefully I hit most of the talking points, so we can get down to some clarification.