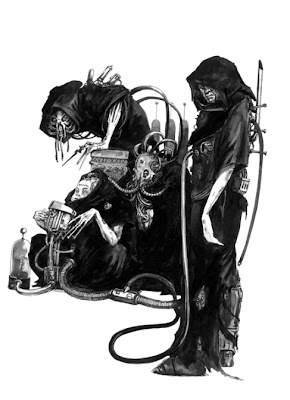 It is already available for pre-order, The Emperor's Will. The new book is full of artwork depicting the agents of the Imperium, put together by the John Blanche. The price is not bad, sitting at $40 here in the U.S..

If you are interested in Warhammer 40k Artwork, I have listed all the books I know of from the Black Library, with links for if to order them. I already have a couple of these, and I do need to complete my collection. The quality is very high, and I the books are durable. 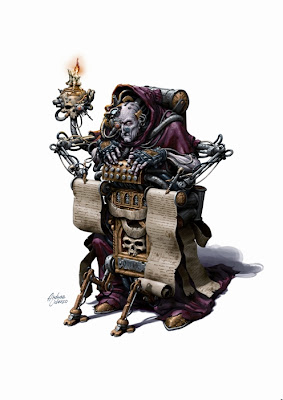 The Emperor's Will
The Emperor’s Will, compiled by master artificer John Blanche, explores the myriad servants of the Imperium in unprecedented detail, from the humble servitor to the Lord Inquisitor. Think of it as a kind of ‘behind the scenes’ review of the Imperium, except that the scene is an apocalyptic galaxy of war.


With stunning work from over a dozen artists, it’s hard to pick out any particular piece, but here are a couple of our favourites.

Horus Heresy Collected Visions
Collected for the first time is the entire Horus Heresy art andbackground book series, which incorporates all four volumes. With text by Alan Merrett and accompanied by a wondrous array of heroic imagesfrom Sabertooth.

Inquis Exterminatus
Black Library presents an epic celebration of the art of the Warhammer 40,000 universe. Compiled by John Blanche from over thirteen years of astonishing images, Inquis Exterminatus is crammed with art from the past and present. There are pieces which have not been seen since the very earliest incarnations of the Warhammer 40,000 game - and a selection of works produced especially for this book.

Insignium Astartes
The long out-of-print guide to Space Marine heraldry by Alan Merrett is back as an A4 full-colour Print on Demand title.

Thisincredibly detailed sourcebook is the most comprehensive account todate of the Codex chapters, including unit markings, chapterorganisation, vehicle markings and special troop types. Taking theUltramarines chapter as its prime example, Insignium Astartes closelyexamines the elite super-warriors known as Space Marines and explainsthe significance, history and complexities of their incredible heraldicarmour – making this book a must for anyone with an interest inhumanity’s greatest champions.