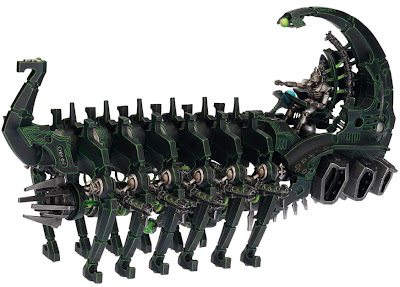 Here is the latest in the Necron Backstory. There is definitely a lot of change for the Necrons, and many people, most particularly the players that have had this army for years do not like it. By the same token, I am curious as to the percentages of people that either like or do not like the changes in the new necrons.


I have a vocal minority complex, meaning I believe that most of what you hear are the vocal minority, but I have decided to find out the truth (at least as far as the truth can take us for people that visit this site).

I am going to do a quick poll on the left hand side of the screen, and run with all the updated information while the poll is running, so vote and lets see what the real feel of the people online are. It will be simple, Love them, Hate them, or somewhere between. I will even tone it down some, since we are mostly guys. Fantastic, somewhere between, or Hate them.

Below is the latest on what the Necron back story is. I will continue to update your information this week while we await the final release of necrons. The poll ends at midnight next Sunday PST

via Yakface
The Necrontyr's empire was massive at one point, but the different Lords in the empire started to turn against each other in civil war. To prevent this from happening the overall ruler of the Necrons (the Silent King) started the war against the Old Ones specifically to give them a common enemy to fight against to prevent his empire from destroying itself. Of course, the Old Ones ended up kicking their butts and in desperation, the Silent King found the C'Tan and agreed to the Deceiver's pact without realizing what he was doing. However, after the Necrons helped the C'Tan to kill off the last Old Ones, the Silent King then ordered the Necrons to turn on the C'Tan in vengeance and utterly destroyed the C'Tan into tiny shards. This war agains the C'Tan weakened the Necrons overall so much they decided to go into stasis to avoid the vengeance of the Eldar (the C'Tan had killed the Old Ones, but not all their children).

Now that the Necrons have reawakened in the 41st millennium, their goal is no longer to 'harvest' souls for the C'Tan (the C'Tan shards are now their slaves) as it was in the old book, but rather to reestablish the great Necron empire that spanned the galaxy before the war with the Old Ones began. However, the overall hierarchy of the Necron people is gone for the most part, leaving each individual Empire to once again rule for itself. This means each Tomb World (or cluster of Necron worlds) is essentially a separate little empire to itself, with a full backstory and idiosyncrasies. While Necron warriors are pretty much just automatons and Immortals not too much better, every other higher Necron being is now much more like an actual person, as their essence is simply trapped inside a metal body.

So there is lots of crazy nuance to Necron culture that was never present before. The codex now has plenty of 'quote' boxes featuring memorable quotes from Necron Lords like other races have in their books. There are some Necron Lords who honor valor in battle, there are a few Necron Lords who trade with other races, and although an uneasy alliance apparently, yes Necrons and Blood Angels did end up fighting against a Tyranid Hive Fleet together. Oh, and there is definitely plenty of reason to have Necron vs. Necron action now (as the old feuds between competing Necron Lords flare back up again).

All in all, it is a major tonal shift. While part of me recoils from it, the other part of me thinks that Necrons as they were had no distinct 'character' that each player could choose to get behind. Yes, the race as a whole had 'character' in how it was organized and functioned, but there was never any really good reason that a player should have his Necron force painted and modeled 'X' way as opposed to another player with his Necron army looking 'Y' way. People certainly painted their Necrons in different (neat) ways, but there was never really any good fluff giving players inspiration to do so.

The only real 'personality' in the old book was the Deceiver, and that frankly wasn't the Necrons, it was their god. The mindless mission that all Necrons were on was basically really similar to Tyranids...the Necrons were coming to harvest every living thing in the galaxy (yawn).

This new incarnation, love it or hate it, gives the Necrons a whole wide array of personality and every single empire has different goals and motives (not to mention paint schemes, markings, etc). Some Necron Lords are obsessed with finding the perfect flesh bodies to transfer their sentience back into. One Necron Tomb World was damaged during the great sleep and erased all the Necron sentience and has started basically commanding its Necrons like true robots (and is actively attacking other Necron worlds to take them over and keep growing), and there are of course dozens more little stories. The Silent King, who put himself into exile (for his unforgivable crime against his people) by leaving the galaxy after defeating the C'Tan encountered the Tyranids in the void between galaxies and has returned to spur the Necrons into action against the Tyranids (realizing that if the Tyranids wipe the galaxy clean of biological matter, then the Necrons will never find a form to transfer their minds back into).

Oh, and the biggest rival of the Necrons is now actually the Altaoic (sp?) Craftworld. Apparently they are the only Eldar who stayed true on the original path to seek out and destroy Necron Tomb Worlds while the rest of the Eldar got all caught up and destroyed in their decadence and then the Fall. Altaoic rangers have traveled the galaxy far and wide over the millennia (ever since the Necrons went to sleep) to track down and destroy or hamper Tomb Worlds from reawakening.

So with this new direction there is now tons of different possibilities for players to make Necrons forces different from each other and there are neat new takes on 'nemesis' races like Eldar & Tyranids to drive gaming plots as well as good reason for Necron on Necron battles.

And as for totally destroying the background of the C'Tan, the codex does allude to the fact that there are lots of unaccounted for C'Tan shards still allegedly cast around the galaxy. The Necron are always trying to hunt them down and imprison them (in pocket dimension prisons), but this does still leave the door totally wide open for a shard of 'The Dragon' to be on Mars and for shards of 'The Deceiver' to have done all the crazy things that's been written about him in novels. Essentially, the full power C'Tan were massively, massively powerful, and the 'shard' versions of them are closer to the idea of what we had in the last codex anyway (something that can be killed/banished on a battlefield).

It is very clear that the Eldar empire is the main reason they go into hibernation, having some sort of premonition that the Eldar can and will eventually crumble as all living beings and empires do.

It was a fairly solid plan, except a lot can go wrong when you're sleeping for 60 million years, and apparently billions of Necrons have been killed by simple, normal shifts in the galaxy in that time (stars going supernova, tectonics crushing tombs, etc)...but what they didn't predict was how poorly they'd all awake from the sleep. All Necrons were supposed to wake up at once, but that didn't happen. Some Necrons woke up during all periods of history (including the Horus Heresy) and many still haven't woken up. And in some cases those that wake up have suffered terrible afflictions (like the Flayer disease).

Since there are any number of strange and undocumented Tomb Worlds now, there is totally space for you to come up with whatever backstory and motivations you want for your personal Tomb World, much like every other codex allows players. Of course, there are also dozens of tiny little story snippets (as there are in every new codex) that give you plenty of inspiration to create and play armies as well. For example, say you really like the whole 'automaton' feeling the army had in the old codex. Well, in the codex they have a story telling of one Tomb World that during hibernation accidentally erased all the sentience from the sleeping Necrons and decided to 'take them over' and has since decided this is the way forward for the Necron race and is actively attacking other Necron Tomb Worlds to collect more bodies for the cause. Basically the only sentient brain in that whole army is the Tomb World itself (it even has given itself a name). So you could definitely use this backstory as 'your' Necron force and stick with more of a simple, robotic feel to your army.
10/31/2011
Natfka
Necrons