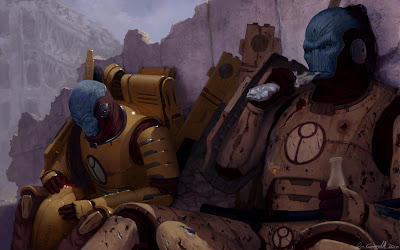 There have been rumors flying around that Tau just might be the next codex release. Most people are simply posting the rumor without its source, which is giving the rumor much more credibility than it deserves at the moment. So I am posting up the entire post from notprop who put this rumor out for us, and then at the end I am posting up to what the rumor evolved into. You can decide from there.

This rumor requires a ton of salt, as the source says in the post. The fact that the rumor has gained more traction than it deserves at this time is proof, not enough salt was used.

via notprop
During a mooch around one of the better known Independent Games shops in the UK I was told that GW are no longer accepting orders for Tau stock indicating that a release is proably imminent. So guessing the traditional WFB/40K pattern following Necrons there will be some WFB goodies followed by Tau in the new year.

The bloke who told me was a blowhard so season as appropriate, but the owner corroborated it so I thought that I would put it out there.

Please note that several people have claimed to have ordered Tau this week, so the rumor, or at least the first portion of the rumor does not seem to ring true. If anyone has any other experiences about being able to order Tau or not, they can comment below.

I won't implicate who exaggerated this rumor, but here is what the rumor of Tau coming evolved into:
there is suddenly chatter going up that Tau may be sneaking into the late Q1 2012 release slot (where Grey Knights were this year) as the next 40k codex. There has been conflicting chatter of late of either Tau/Eldar for this last slot leading up to the 6th Edition summer launch featuring Chaos Marines.


Whether Tau are coming next are not, is not known yet. It is one of the strong possibilities. We have heard before that Tau are done. However the Tau rumors this week, even though overwhelmed by Necron images and rules, have been blown out of proportion.