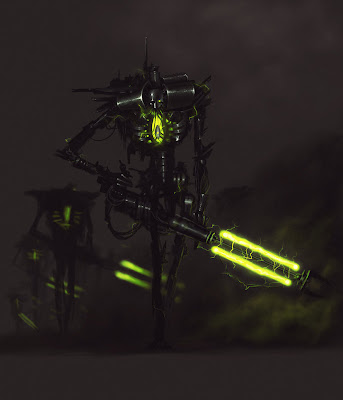 This week was another extremely busy week with the flow of rumors. It was like the river had been dammed up for almost a year, and the floodgates finally failed. The highlight of course was the release of the Necrons. It is nothing short of an amazing release. I expect to see a ridiculous number of Necron players flooding my local watering holes.


Necron Vehicles
The new Necron army could very well be fielded with very large AV 13 vehicles with Quantum Shielding. For those that do not yet know, Quantum Shielding gives a +2 AV to the vehicle on all facings until a penetrating hit takes down the shielding. While that is an open topped skimmer player like my self's wet dream, they look pretty expensive so far.

The one thing that keeps haunting me about Quantum Shielding, is negating the strength of the Missile Launcher. Think of this, 9+ av 13 vehicles. Many current lists just cannot handle this without getting in close with their Melta guns, which should make a Necron player just smile.

While Necrons are a great shooting ranged army, they look like they have some extremely nasty close ranged abilities, not to mention things like deathmarks and a great number of rapid fire weapons. Bring in those transports too close, and the Scarabs will get ya, The monolith will suck ya up into it, and of course the new customizable C'tan. There is just so many tools in this codex, that it is turning out to be extremely deadly to the standard S8 Missile Launcher.

The return of the single shot Lascannon? Dealing with Necrons at a range is definitely going to have to include a few of these. MSU'ing your lascannon shots brings about a new strength in bringing down Quantum shielding across the board, while other things like typhoons, Longfangs, all the Autocannons that I hold onto dearly, take down vehicles that lose their shielding. This could very well add an additional shot needed to take down a Necron Vehicle, making them very durable indeed.

Those vehicles are huge. No hiding these....... Oh wait, that monolith can hide just about anything.


Release Schedule
There are a lot of conflict here on what codex's are going to be released, and I am sorry to say that I think Black Templar and Dark Angels are on the 2013 schedule. Kind of makes me sad really, as I would enjoy seeing the Black Templar return to power, but I think the latest updates with improved storm shields etc, was a quick fix that was intended to last past the 2012 6th edition release into the following year.

So what do I think next year will show based on the rumor mill and what I have heard? Tau, Chaos Legions, and Eldar for 2012, with a mid year 6th edition release. I am not yet willing to placed Tau before Chaos Legions and this is why; I expect a January or early year release in the Fantasy range of army books. I then expect to see a march April release in 40k, which is a toss up between Chaos Legions and Tau.

I can logically put either codex release in front, and that is my current conflict on the subject. Its very possible that Games Workshop is thinking something similar as well, and have not yet decided. I am hoping by years end that we get a hint of the proper order of things.


6th Edition
The one exciting thing that is driving me to pour over that beautiful Necron army, is the attempt everyone will be making to divine 6th edition rules changes. The rapid firing change alone will change the dynamic of shooting. If you have not heard the rumor is Standing Still= 2 shots at 24". Moving= 1 shot at 24", 2 shots at 12". Talking about closing the gap between a bolter and a storm bolter.


Modeling
I just finished my Techmarine this week. While all metal, I was surprised how much I enjoy this model. I needed one for what I was considering fielding this coming week on the tabletop, and the model with the servo harness is quite the amazing metal model. I do wish it was in finecast so it was easier to work with, but I love the look and feel of the model.
No pics yet, sorry.


My  One Necron Model
Back in third edition, just before Necrons were released, Games Workshop sent out single warriors in a little bag as a promotion to stores. Well, one of my local stores gave away their model as a prize in the tournament, and so I still have this little model sitting in its bag from the day I won it. Not really much to say on it, but I thought it was interesting that I found a Necron model amongst my bits bags the other day. So Technically I can say I have had a Necron army since 3rd edition? lol.


Faeit 212
This week, I am hoping to get back on schedule. I know we will be hearing more about Necrons and other rumors, but I miss the rules discussions and tactics. The rumors and information were just coming in too fast this week to handle. I think I even missed one or two still sitting in draft form.

I have ran into some problems with updating the site, and part of it comes from my lack of technical expertise. There were a couple blogger issues as well mid week, that had me starting over, thinking I had messed up and destroyed the changes I was adding to the blog. I was updating everything on my computer, just to try and figure out the self inflicted problem, when it turned out that it was just blogger behaving oddly. So thank you to those that work on helping us bloggers in the help forums, and thanks for those helpful emails.