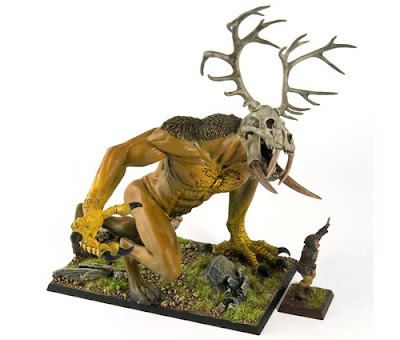 Two new releases from Warhammer Forge today, the Wight King Battle Standard Bearer and the Incarnate Elemental of Beasts. The latter of which is definetly on my list to get. Both models are already available today, and you can follow the link for more pics and for ordering your model. 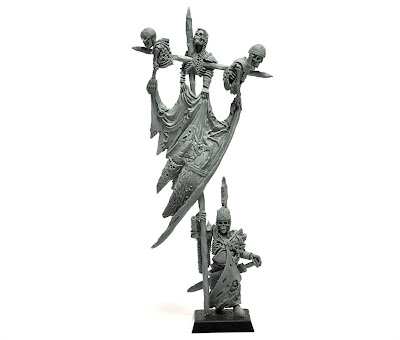 Vampire Counts Wight King Battle Standard Bearer
Marching implacably forth from the benighted land of Sylvania, encrusted with grave-dirt and swathed in the ragged and tarnished wargear of a bygone age, this long-dead Wight King has been raised from the grave by arcane and unhallowed magics.


Such a horror is a common sight among the ranks of the Undead, and these fell warriors are often entrusted with the standard of their loathsome master, guarding the tattered colours with nerveless skill and a sharp blade. The Drakenhof Banner that this resin Wight King Battle Standard Bearer carries is packed with incredible detail. 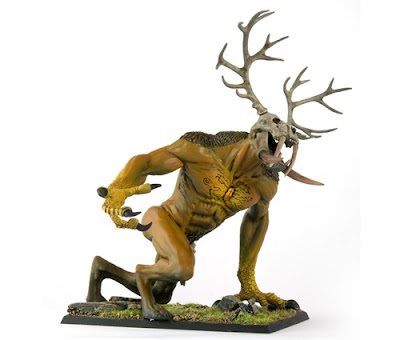 Incarnate Elemental of Beasts
Known in legend as the Bloody Hidesman, the Horned Man or the Faceless Hunter, the Incarnate Elemental of Beasts can only be summoned through savage and secret rites all but unknown outside the Amber College and the hellish Bray-Shamans of the hordes of mutant beasts that skulk in the dark places of the world. It is a towering, half-human figure that embodies the ferocity and merciless hunger of the wild, a mortal form binding the turbulent spirits of numberless predators.


The masters of the hidden Lore of Ghur speak of bloody rituals performed before a great idol of beast skulls and dripping, flensed skins, and the terrible price to be paid for the service of the Bloody Hidesman. Yet such is the dire need in these endless days of war that engulf the world that the power of the Incarnate Elemental of Beasts is often required
10/12/2011
Natfka
Warhammer Forge