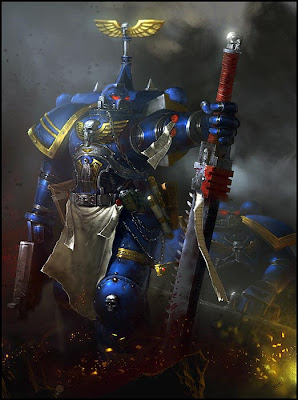 Games Day Austrailia apparently went off much better than the UK one did. Still no information regarding Necrons, but we didnt expect to hear any.

We did get some comments from Phil how he messed up on the Dias of Destruction and the Court of the Archon "he would change them if he could".  My answer would be "You can, do an errata", its quick and easy.

Information that was revealed at Games Day
- 6th edition next year

- less waves, more complete releases with only some characters left for later (like Ogre release)

- books written in team work, even if only one person credited as author

- Phil would change Court, Decapitator and Dias and some other things in hindsight

- for practice they wrote an army book (Fishmen) and a Codex for new races, not meant for release

Kroothawk was nice enough to gather up quite a bit of information here.
Otherwise, thanks to Gotthammer for doing this Games Day Wrap up. Getting information out of Games Day Austrailia has been hard to find. You can check his blog for more about the events. http://collegiatitanica.blogspot.com/2011/10/games-day-australia-2011.html

via Gotthammer
The Q&A was well populated and fairly interesting. Some points of note:
- In regards to new races they asked "raise your hand if you feel your army is laggin behind in attention?" and used the fair number of hands to illustrate the more pressing need to update the current crop of Codexes first.

- Adam did go on to mention Necrons and Dark Angels as two in need of help, but it didn't sound particularly to indicate any info on forthcoming releases.

- Phil commented he would change the Court of the Archon and Dias of Destruction if he could in Codex Dark Eldar. The Court was at one point planned for a boxed set so you'd have to buy one of each so it made sense to have it that way. The Dias was a last minute job, and needed more tweaking.

He also mentioned changing the Decapitator and making some units better and some worse, but no specifics on why.

- In regards to supplements like Cities of Death and Planetstrike they said the designers used tose as a change of pace or a reward "like desert", and they wanted to do more.

- This led into a discussion about global campaigns. They are limited as they can't have huge ones that change the universe as the results might mess up the story - Adam specifically mentioned that the results for Medusa V were not what they expected. The questioner brought up that it helps get gamers involved in the universe by having a shared goal. They did ask who would be interested and got a strong positve response.

- There was talk about the design process and how ideas come about. Phil said they are trying to change the process from "you will design this" coming from above to a constant stream of pitching ideas and having a more free-flowing creativity.

They have a giant whiteboard where the studio just put up ideas for anything and get feedback and response on it. Assignments are generally given to the most eager studio member as they'll put the most work in, "and lots of unpaid overtime". There is however competition, including knife fights in the carpark, for some jobs so they painted the studio as very free-flowing.

- Someone asked about FAQs, and the reply indicated there's an assistant designer who is chiefly responsible for them all.

- On playtesting, Adam used the example that for High Elves he personally played 40 games, recording the results, as well as other studio members, White Dwarf guys, "their external playtesting group", and other in-house team members.

There was no fixed amount done though, and it is an elastic amount.

- When asked what they thought on balance, the reply was having a tough but fun game where it could have gone either way at any point. They did acknowledge that they sometimes screwed up, and that they all find it terribly embarrasing.

- A question was asked about release schedules, with Dark Eldar getting more models while some armies are still waiting (this got a chorus of "Tyranids!" from the audience). The reply was that they were changing to try and do a single major release for as much as possible with only some Special Characters being delayed as they can be troublesome to get right.

Ogre Kingdoms was used as the example of this.

- Phil then went on to talk about how they won't be re-treading Forge World, and the Mournfang are distinct creatures from the Rhinox riders. Forge World is there to flesh out the fringes and add depth was they way it was put, and they do their own thing.

- Jervis reads every letter he gets sent, and tells everyone in the studio about them. Adam did a Jervis impersonation for effect.

- Phil and Adam talked about production time of a codex. Dark Eldar was around five years of dev time, but the actual writing takes much less time, a few months or so. Most codexes take around three years from initiation to publisher.

- Talking with Adam and a guy who collected Dark Angels, the DA player commented on how he'd like to get all the Land Raider variants / Storm Raven etc. Adam replied that his design philosophy is to not do that, to avoid homogeny across the Marine ranges.

If he was to do DA, he'd instead focus on making Deathwing and Ravenwing more unique. His specific example was that Ravenwing used to get the Tornado Land Speeder, but now everyone does, so he'd go in that direction more than just giving them everyone else's toys. He was talking purely hypothetical - don't take it as a hint of future releases!

- I had a stickybeak at the Dreadfleet sprues, and the kit is very, very detailed and packed with loads of things. They had some demo games going, but inside the sales area, so I didn't see them until later when I didn't have time to have a game. Quite a few people were picking it up though.

- Phil talked for a while about the design of the game, and segued into a discussion about getting locked in a room with the Perry twins for a month looking at weird sea creatures like the Goblin Shark.

Q&A with Phil, Adam, the Perry Twins, Anthony Reynolds, Matt Farrer and Alan Merrit.
- I asked about any editorial control over what they create. I was told the only control there is comes at the start of a project, whether the pitch for a book/model is given a green light or not, and not in terms of any marketing team ("they don't have any" - Alan) or sales driven objectives.

- They were asked about the future of Finecast and the character plastics, and the inclusion of races such as Jokaero and Slyyth as minor notes in the armies.

The response was that they were wanting to include more when they could to give the feeling of a broader universe, as well as more opportunities for modellers. They can't guarantee that every race mentioned will be included though, as it still needs to fit in the army lists.

- Alan talked about introducing new ideas at some length, sparked by a question about computer games and how close they had to follow GW's mandate.

Basically they have to do as they're told, and can't introduce new things. If they have a gap they need filling they come to GW for a filler (such as the Orca in Fire Warrior). The only exception anyone could remember was Phil saying the Rail Rifle in Fire Warrior was designed by Kuju to fill the sniper rifle FPS archetype, and the studio liked it so much they adopted it - everything else is GW's doing. I was tempted to shout "metal bawksez!" or "spess mehreens" at them, but abstained.

He further elaborated that they won't be discarding and races, as they learnt from their mistake with Squats (and he did specifically call it a mistake) and that they realise now that "they can't pretend like things didn't exist".

- There was quite a lot of talk about plastic models and designing them and whatnot.


Other information
via Born
I was there, Gotthammer seems to have gotten it all pretty much spot on.
No, there was no new stuff of any kind at Games Day, which should be expected by now. They began the seminar by clearly asking not to ask questions about upcoming releases, as they would not (in fact, were not allowed to) answer them.

Only real things to add in I can think of right now is, going back to the design process and the "white board" system, Phil stated they prefer projects to involve multiple people, although of course usually only one ends up on the front of the book. As an example, the question was in fleshing out the DE and how much came from him and how much came from Jes. He said there was a lot of bouncing ideas back and forth, and they prefer things to work that way, as limiting it to one person only limits the product, they feel they get better results from teams of people all having input. The end result is while one guy is at the head and will have his name on the book, ideas and suggestions can come from anyone within the studio.

Adam also mentioned that as a training exercise they wrote a Warhammer Armies and Codex book for two entirely new races (he specifically mentioned the famed Warhammer Armies: Fishmen, so yes people, in some form it exists! ). They have no intent to release them, they were written purely as a training exercise in Codex creation, figuring out what works, what doesn't, and so on. I liked the idea that they were, in a sense, 'honing their skills' on test versions rather than working out design kinks on the things they were actually releasing.

Adam also mentioned on the topic of new races, he recently put forward an idea for a race which he said was existing and we would all know in the background, but which didn't exist on the tabletop, although he would not give any more hints. He said the question that was asked was "if we could only ever do 1 new army ever again, would it be this one?" A good way of going about it, I think, although he didn't so what conclusion they actually came to...

I was talking to the manager in charge of the Forgeworld stand at the Australian Games-Day and he said that Imperial Armour 1,2 and 3 were being re-written for the release of 6th edition 40k next year.

I had confirmation from the main FW representative that they will be sorting them out at some point. Take with salt if you must, but it was straight from the horses mouth...


I was told pretty definitively that they're going to be done.


You may be right that they might not be done for a while, but they will be done, which almost certainly rules out GW doing them.