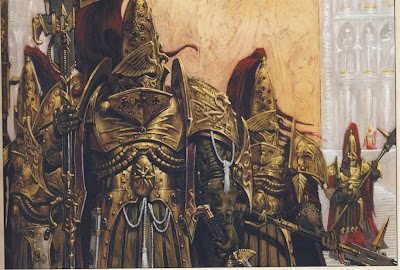 This week wraps up with Games Day AU, a confirmation from there that 6th edition is coming next year, and of course this weekends release of Dreadfleet.

I think the biggest piece though really is that 6th edition is confirmed for next year. The guys at forgeworld had said that they were re-writing the IA books for the new edition. Nice little slip of information for us. I will be doing a very extensive compilation of what I know about 6th edition later this week.

Grey Knights vs Tyranids
I really had figured that I had a pretty easy win earlier this week vs a tyranid player. However, it wasn't, and even though I still won the game, I learned one valuable lesson. VS Tyranids, you cannot rely upon your force weapons to rid of the big baddies. With trying to get my psychic abilities off on a 3d6, I was not able to get one set of force weapons off in close combat vs the big monstrous creatures. It made for a real tough game. It really was sad, and perhaps my dice were a little off. I was counting on it, which turned out to be a bad idea.

I don't think my opponent really realized how close he was to breaking my army, and winning the game.

Next game I am fielding a side list, with my Culexus assassin and combat squadded purifiers.

Rules of Our Game and other weekly Series
Its official as its going to get, I am going to keep the series going as it is very popular. However, please do not take my reading on the rules as the final line. I know many of you are not, but understanding the rules and the murky spots within them, is an ongoing process. So dissension and disagreements as long as they follow a reason or description of why, are very much appreciated.
One of the reasons I started this blog to begin with, was to define and refine my own thoughts towards 40k. It has done wonders in that regard, which is the primary reason I keep doing it.

So look forward to Rules of Our Game next week, as I am already backlogged on good rules to discuss.

This week I missed The Words of Faeit tactical series. This will happen with all the weekly posts I do on occasion. Sometimes I will try and make it up, other times, I simply do not have the time or a worthwhile post. This week I had one done, however, after re-reading it I took it off the post schedule.

This week I am pretty brief on my editorial, so I apologize. Trying to buy a house, and turn my existing into an investment property has been consuming most of my spare energy.