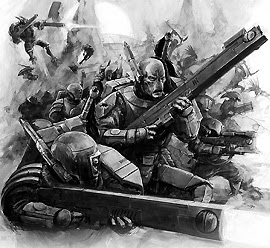 It looks like Tau are set to be released right before 6th edition hits. The Demiurg are in, as is yet another undisclosed ally. also thrown in there is a small space marine bit, Dark Angels are not in the 6th edition starter box.

After last weeks bad set of rumors on Tau, I dug up what the rumor should of been. These rumors I dug up were conversations in the forums about a Tau release. These bits of rumors were all given to us Saturday and Sunday in response to the Tau are Imminent rumors. Thankfully something of substance was delivered.


So with these rumors, I can easily see that there is a codex between now and an early summer Tau release.

Please Remember that these are rumors, and to apply salt.

Frgt/10
All the new Tau models are done; Dave Thomas worked on them for roughly 18 months and he's finished them all now.

They're just waiting for a releases slot, I don't now when that is but my guess it is has since been locked in since I found out this info.

via Harry
As you know I don't know much about 40K and so couldn't possibly shed any light on what it might be but ....
... amongst other things ... Dave has been working on something pretty big. (Helpful as always. )

Also Frgt/10 is correct in that Dave Thomas has been exclusiely on Tau for 18 months but he is not 100% correct. Whilst MOST of the models are done. My understanding is Dave Thomas still had some bits and bobs to do. (i am guessing finishing characters?)

But even so that means they could be in the next six months.
(But I am not expecting them quite this soon).

I have them for the early summer in my, constantly updated, release schedule as the release right before 6th Edition

Obviously you are free to not answer or may not know but there is only one thing I want to know how many new alien auxilaries and I don't mean new units of Vespid/Kroot I mean new species? Pretty please

So that would suggest at least two "More".


ghost21
the demmiurg are there as are a bizzare race, the vespid get 2 slots, and the kroot get an aditional

I am not starting any rumours here, but aren't chaos coming out around the new 40k rule book, which is rumoured for release next summer.
I believe someone started a rumour a couple of months ago, cannot remember who, stating that chaos would be the first (hardback???) release for the new rulebook.
The starter set(s) are Chaos and Dark Angels.
Apparently Imperial Guard renegade armies will be a part of the Chaos release.
Once again, do not slaughter me for starting a false rumour, I am just quoting what someone else wrote a couple of months ago.

hate to burst your bubble but its not dark angels

Originally Posted by Rogue Star
There were two four-armed creatures drawn up in concepts. I think the idea of a four-armed mercenary was however, nabbed for the Dark Eldar Sslyth. 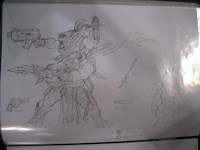 the guy on the left well, they have plans for him