Dark Eldar Voidraven Bomber to be Released in February 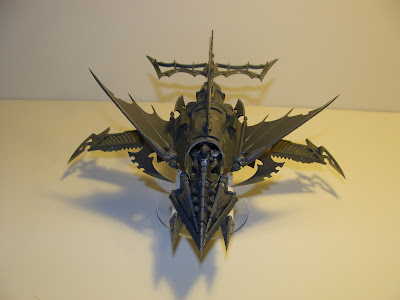 The Voidraven Bomber was rumored to have had some modelling issues, so was pulled from its release schedule of late summer or early fall. This is the big boy of the Dark Eldar flyers and no doubt we would all like to see its release. It was so long ago we heard Jess say that everyone in the design studio was running around with these models making swooshing noises.

The rumor has it that it will be released this coming February, and that concept sketches have been seen. I wish we had a photo of these sketches.

The pic is from Dark Future Games by old school terminator. Nice Conversion.


Please remember that this is a rumor, and please take with salt.

via Eldargal
I've heard from several sources now that the Void Raven is pencilled in for a February 2012 release. As always take with a grain of salt and don't get your hopes up.

MajorWesJansen, and no doubt others, certainly saw the concept sketches at Games Day Chicago, there were witnesses.