Necron Attack Uncovered (its not a shooting attack) 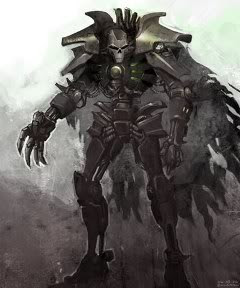 Finally we are possibly getting to the truth of what we will see in the upcoming codex. A lot of speculation and gasps of Matt Ward hate were abound. So lets evolve this rumor into something more concrete, and more realistic.


Yakface has taken the time to clarify what the attack is with a pretty good description. Now if you know more Yakface, since apparently you do, email me..... lol.

Remember that these are still only rumors, please take with salt.

via Yakface
Okay, a much more full description of the rule is like this:
This rule applies ONLY to the units the special Necron character is engaged with (it doesn't affect every model in the enemy army of the same type).

It happens after the Necron character has killed someone in combat and after all blows have been struck on both sides.

Roll a D6 for every type of model (friend or enemy) that the special character killed that turn. On a 4+ all other models in combat of that type take a wound (armor/inv saves can be taken as normal).