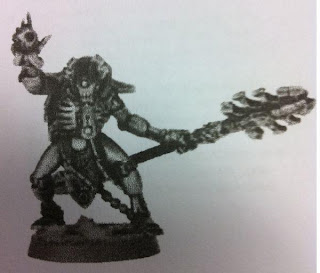 This morning I have a listing of your Necron army wide special rules, Reanimation Protocols, Ever-Living, Entropic Strike, and Living Metal. There is also a listing with Weapon types and rules.

The Pic above is (although blurry) of a Cryptek. The pic was provided by Bramguant and is said to be a finecast miniature.

Please remember that these are rumors until we get the codex in hand, please take with a grain of salt.

via Yakface
NECRON ARMY-WIDE SPECIAL RULES
• We'll Be Back from the previous codex has been replaced by Reanimation Protocols (sorry I keep accidentally calling it Resurrection Protocols in some of these teasers). It now works at the end of each phase, but only on a 5+. You now remove models and place a token or marker next to the unit to remind you how many rolls to make (although you could just use the downed models as markers, but the important thing is you know that these markers don't affect gameplay at all). The rules are very clear about when/how models that return to play via RP are placed and if the entire unit is wiped out then the unit is gone and now RP rolls can be taken. Similarly, if the only model left in the unit is a character (such as a joined IC or a Cryptek/Lord) then these models alone are not sufficient to allow the other models to attempt their RP rolls. Nearly every non-vehicle unit in the game benefits from RP (as opposed to the old WBB, which only worked for 'Necrons'), except for the C'Tan shards.

Reanimation Protocols returns the model to play with a single wound unless they have a Phylactery in which case they come back (the first time they get back up) with D3 wounds.

• Ever-Living. This is basically just an additional Reanimation Protocol rule that characters have to describe how they're placed back on the table. Only characters (including basic Lords & Crypteks) have this rule, no squads do. The only real thing to note about it is that if the model wasn't joined to a unit when it went down, then if it returns to play it must be placed within 3" of the spot it fell. So characters are the only models it really matters where their 'marker' is placed when they are removed. So in some situations, such as an enemy unit killing a character with Ever-Living in CC and then consolidating on top of his marker, it would be entirely possible to prevent him from returning to play (as they can't if you are unable to place them within 3" of the spot they went down).

• Entropic Strike. This is mainly a Scarab rule, but it also applies to a few close combat weapons in the army as well. Basically if a model suffers an unsaved wound from an Entropic weapon then it has it armor save immediately changed to '-'. Obviously this would only apply to multi-wound models as any other type of model would be dead if it suffered an unsaved wound (ignoring the argument about whether a wound stopped by 'Feel No Pain' still counts as an unsaved Wound or not). Against vehicles, for each hit by this weapon type means at the end of the phase you roll a D6 and on a 4+ the vehicle's armor value is reduced by '1' on all facings. If a vehicle is reduced to '0' on any facing then it becomes wrecked immediately.

• Living-Metal. Not just for the Monolith anymore! Many vehicles in the codex have this and it basically allows the vehicle to ignore a Shaken result on a 2+ and a Stunned result on a 4+. These rolls are made immediately when the vehicle is damaged so this is nowhere near as good as the Grey Knights ability to remove Shaken/Stunned results.

• There doesn't appear to be any Force Org shifting around in this codex at all unlike most other recent codexes (so taking any special character doesn't allow you to take a unit in a different section of the Force Org chart at all).


NECRON ARMY-WIDE WEAPON NOTES
• Gauss Weaponry does NOT have rending. It retains the 'auto-glance' on a penetration roll of a '6' rule, but has otherwise has lost the 'auto-wound' on a roll of a '6' regardless of Toughness that it used to have. The Gauss Cannon is now apparently Assault 2 & AP3 (I'm assuming the Strength is still 6).

• Telsa Weapons. With these weapons for every '6' rolled to hit the 'target suffers 2 additional automatic hits'. Whether or not that means the target suffers 2 or 3 hits in this case is a bit ambiguous, but I think the word 'additional' means that its actually 3 (one for the original hit for rolling the '6' to hit and then another additional two for a grand total of 3). The big daddy version of this weapon found on a lot of the heavier vehicles is the Tesla Destructor (and is almost always twin-linked to really maximize the chance to get those extra '6's to hit). All Tesla weapons are 24" and AP '-', but the Destructor is S7, Assault 4 and 'Arc' (which means you roll a D6 each unit, friendly and enemy, within 6" of your target and on a '6' they are struck with D6 S5 AP- hits as well). While the AP '-' keeps this weapon from being a premiere light vehicle killer, I think with all the potential S7 shots this can theoretically kick out, it still going to be pretty good at zapping vehicles.

The weapons go in order from lightest to heaviest as: Tesla Carbine -> Cannon -> Destructor.

• Particle Weapons. These are basically the blast weapons of the Necron army (with the exception of the pistol variant) with no special rules. They all have a pretty high Strength and a mid-range AP.

The weapons go in order from lightest to heaviest as: Particle Caster (pistol) -> Beamer -> Shredder -> Whip.

Also, i haven't seen any mention of the Eternal Life rule, which allows whole units to get up again. No idea how it works, though.


Also, the Cryptec is slightly less expensive then the Overlords, the flayed ones however are 35€, thats 9€ more then rumoured.


Ah, Immortals and Deathmarks ARE one kit. Just to clear this one out.
10/20/2011
Natfka
Necrons, Rumors