Necron Numbers and More Fluff- How many can I field 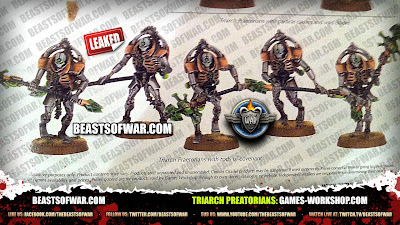 How many Necron Warriors can I field? The answer is 5-20, but lets answer more than that today. Here is the number per unit for your FOC.


Please remember that until we get the codex in hand, take with a grain of salt.


HEAVY SUPPORT
• All Vehicles: 1 per FOC

Well, bits of the fluff talk about other races & systems paying 'tribute' to the Necrons...here's my speculation based on what I read:

Necrons have always felt like they got the short end of the stick. When they were Necrontyr, they had a crappy planet and that drove them to invent technology and get the hell off their planet...but they still wanted to prove they were the best so they set about trying to creat the greatest galactic empire. And they did...but then as always happens, their empire started to creak and moan, so the war against the Old Ones started with naturally the belief that the Necrontyr would destroy the Old Ones and emerge even greater than before, the true heirs to the galaxy. And in fact they hated the Old Ones if for no other reason than because they had the secret for immortality (what the Necrontyr wanted more than anything) but wouldn't share it. And once the war started, naturally the Necrontyr couldn't beat the Old Ones despite their superior technology, as the Old Ones had access to the Webway which meant they could escape anytime they needed.

So eventually the Old Ones (and the races they created) were kicking the crap out of the Necrontyr. And so in the frustration of again getting the short end of the stick, they made the pact wit the Deceiver and sold their souls for immortality and power. But again, they felt shafted because they had essentially been tricked into doing this. So after the C'Tan had killed the Old Ones, they again wanted to take their rightful place as rules of the galaxy but they knew that would never happen as long as they were slaves to the C'Tan, so they turned on them as this is the only way they'd ever be free.

But of course that battle against the C'Tan did tremendous damage to them and thus they decided to use their immortality to 'outlast' the Eldar empire (which they did).

So now that they're back awake (mostly), although they've lost their main command structure as a people that sort of drove them forward towards any single goal, I think their goal is still to do what they always wanted...to rule the galaxy, to be the supreme beings. And this isn't exactly the same as humans, who basically want to eradicate all Xenos and populate all the planets themselves. Necrons more than anything (I think) want to be in control. They want to be worshipped by others. They finally want to get their due as being the rulers. So while they most certainly plan to destroy any force that gets in their way, I also get the distinct feeling from the new fluff that (with at least some of the Lords) they are perfectly okay with leaving existing planets/systems under alien control, as long as those people pay them tribute. Even though I have a hard time imagining what tribute the Necrons would really need (being robots and all), I don't think that's the point. The point is that the other races are paying them fealty and recognizing the mastery of the Necrons, which is precisely what they've always wanted.

I have not seen any force organization chart wackiness unlocked by anything...quite a big change from all the recent codexes, but that's how it seems to be!

Finally, let's look at one of the named character's rules a bit:
Anrakyr the Traveller (they guy traveling around awakening Tomb Worlds and collecting a tithe of troops from those he does) has a few special rules, but one of them is so cool I thought I'd share it. It allows the Necron player to pick an enemy vehicle each shooting phase within 18" and on a D6 roll of 3+, the Necron player is able to fire with that vehicle as if it were his (counting as not moving for the shooting attack and ignoring any shaken/stunned results on it)...in other words he 'hacks' into the vehicle and momentarily takes control!

I can't imagine too many people ever taking this guy over the Stormlord (although he is 50 pts cheaper), but that ability could just do some crazy things, especially in Apocalypse games where you could shoot with an enemy titan or other super-heavy vehicle!
10/18/2011
Natfka
Necrons, Rumors