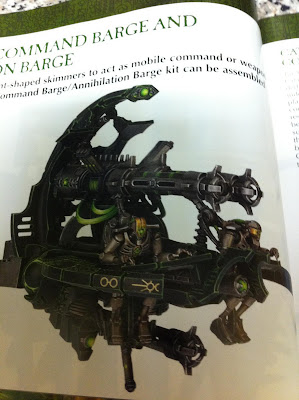 Pics (some codex?), rules, point costs. There is so much Necron information is flowing that is hard to keep track of it. I have had to cut paste, discard, move and literally go crazy with all this information. To be honest, it will be easier to just wait and get the codex in hand to know all of this, but for those obsessive compulsive individuals like most everyone that plays this game, here is some information gleamed from the latest White Dwarf, including a couple images.

The debated about the images being posted, but since they are repeatedly posted now all over the Internet, here they are. They are of the Catacomb Command Barge, the Doomsday Ark, and infantry weapons types. Games Workshop, if you want them removed, you have my email address here, so ask nicely please, and they are gone.

These rules are simply amazing, and I think the Necrons will be a tremendous force on the table top, at the very least, a very unique one. I also find it amazing how many of the rumors have been coming true, alongside a few that were altered slightly. I am very excited to see this codex.

I am still putting this down as a rumor, since I do not have the codex in hand, apply a little salt to everything until we get the codex. Some of these pics are said to be from the codex, however I think they all come out of the White Dwarf. I do not have my White Dwarf, so can someone confirm? 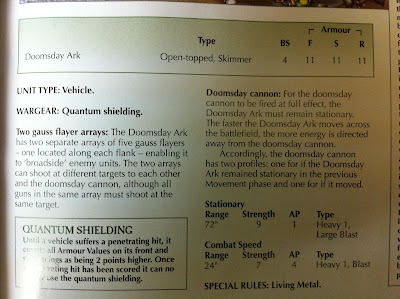 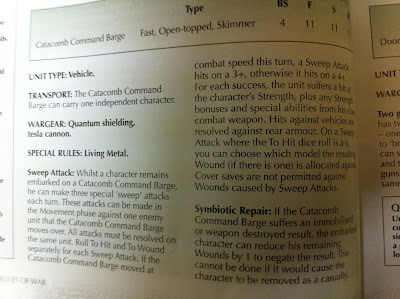 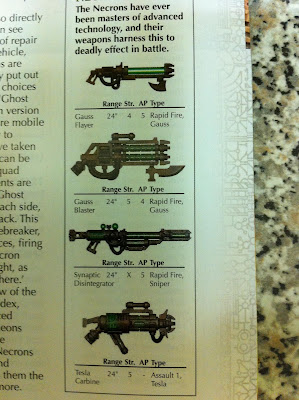 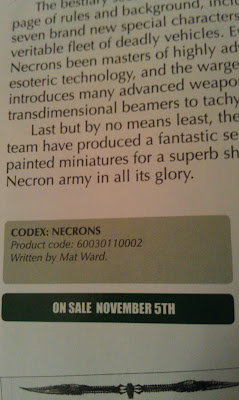 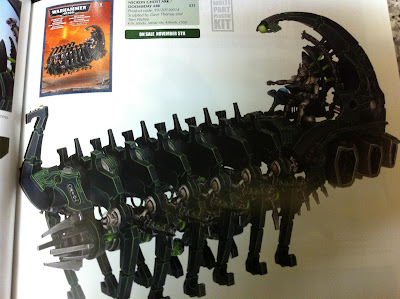 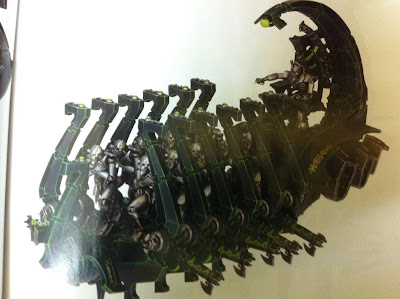 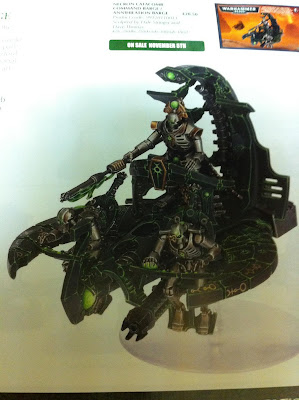 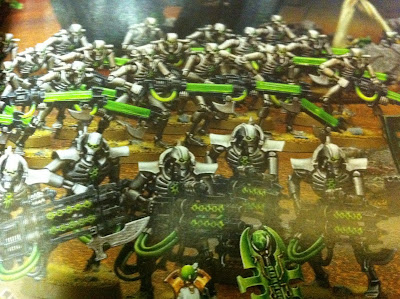 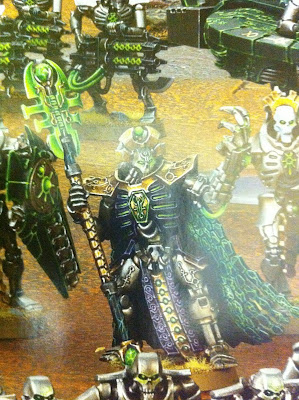 via Yakface  The White Dwarf gives us quite a bit of info:
I am quite glad to hear about the Quantum Shielding rule (only being lost on a penetrating hit). The version of the rule I have gave serious indication that there might be a massive typo with it (or that they had changed their mind back and forth about how the rule would work), but I just decided to post the more conservative version of the rule so as not to get anyone's hopes up if it turned out not to be a typo. But having Quantum Shielding last until the vehicle is penetrated makes the point costs of these vehicles, much, much more reasonable IMHO.

But the Warscythe having 2D6 armor penetration against vehicles? That is definitely a complete change from what I have!

Besides the Warriors being 13 instead of 12 and the regular Destroyers being a teeny bit more all the rest of the point values match precisely with what I've seen.

That tells me that either the 175 mark for the Doomsday Ark is dead-on or else it is only off by a very small margin.

The Charnovokh Dynasty is mentioned as eaten mostly by Tyranids. This has pushed them into restoring ancient dolmen gates that connect their realms to the wider galaxy. This does put an end to the old speculation about Tyranids avoiding Necrons/Tomb Worlds in general.

The Nihilakh Dynasty gives us a Dynasty that just keeps to themselves and has no intention of conquering the galaxy. They are very defensive of their territory though. Kinda like Wood Elves

The Nekthyst Dynasty are noted as traitors, turncoats and oathbreakers. The "taint of dishonour" still hangs heavy over them, and they mostly operate as mercenaries. Mercenary contracts are the only promise they never seem to break. What this also tells us (along with the teaser-trailer) is that Necrons apparently value treaties, pacts and honor quite a bit, to make such a big deal out of the Nekthyst Dynasty breaking them. In D&D terms, Necrons in general are definitely on the Lawful side of the alignment scale.

The common cause for all Necrons is given as "rebuilding the Necron dynasties and the return of the Necrons to their rightful supremacy." They feel they should be in charge. Once again, pretty Lawful (Evil?) guys.

The Bone Kingdom of Drazak is the Flayed One kingdom located in the north-eastern Ghoul Stars, led by a Flayed One King. They're the "fresh meat" zombies/ghouls, that go on random killing sprees. Needless to say, Flayed Ones aren't very respected by the other Necrons. It's said that it's a C'tan curse, not a normal madness or disease, that plagues them.

The Stasis Docks of Seidon were once in the center of the Necrontyr empire. The "master program" of these Docks broke down, so it sends fleets to random locations every thirty-three weeks. The local Overlord is apparently unaware of this.

The Celestial Orrery is said to be one of the galaxy's greatest treasures. It has a small light for every star in the galaxy. Snuff out the light, and the star will soon follow.

So almost all life is at the discretion of the Necrons? They can just snuff out Terras Sun? Talk about Insanity.

They can snuff out stars at will, but doing so creates horrific chain reactions. The Necron faction that controls the Orrey (the royal courts of Thanatos) instead sees themselves as the gardners of creation, only pruning when absolutely necessary.

Of course, this attitude doesn't sit well with many Necrons, which means Thanatos is constantly under attack from both aliens and other Necrons.

Do destroyers keep their true T5? and lords T6?
Yep.

- Immortals @ 17 points regardless of weapon

I hope Tombspiders are around 60pts and allow you to increase the number of an existing Scarab swarm....something in me is horribly entertained by the idea of a 10 Scarab unit becoming a 19 scarab unit on the first turn

It specifically says you can add more scarabs than the unit starts with and 60 points is too high for their base cost, although taking any upgrade will get you there.

Hulksmash wrote:
Still not so bad. I'm a master at keeping my Genestealers within Catalyst range. This won't be that much different. Figure I can still get 2 turns out of them before they move to far. First turn start around 4" behind them and add 9. Move both up 6" and run both. Then turn 2 should have the swarm still close enough so 9 more and then it's off to assualt some tanks

Does bring up some interesting questions though. Do the additional swarms have to be placed within 6" or can we put them anywhere in the unit within coherency? Nothing like adding 4-5 more inches of movement on turn 2

The way it's written here is just that you add a base to the swarm, with no restrictions given where it can be placed.

Sasori wrote:
Looks like a Squad of Tomb Spyders may be compulsory now, with Scarabs. Especially if you can get 3 for cheaper than a Doomsday Ark.

Since they come up to three per slot, can all three enhance diff rent swarms, or must the single squad enhance squad?

The rule is written per Spyder, so there's no reason they couldn't all enhance different swarms that we're within 6".