Necron Information- Monoliths are a new Vehicle Type and More 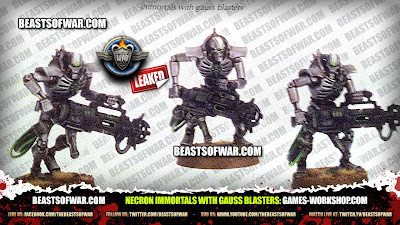 Today we learn that a Monolith is a new vehicle type called a "Heavy Skimmer", as well as some special reserve rules for it. Much more here including the first I have read on the 5 Disciples. So enjoy the read.

Please remember that until the codex is hand, these are still rumors and take with salt. Howeve these are pretty solid.


via Yakface
Crypteks vs. (basic) Lords in the 'Royal Court': both have more like squad leader stats then character stats (1 wound each for example) with both of their base points are in the exact same range as an IG Commissar, for example. However, all of the upgrades for these guys clock in the 5 to 45 point range (each option) with probably a 15 point median for their gear, so you can imagine that these guys will very quickly eat up your points if you give them many (or any) upgrades.

The Lords have access to 4 Weapon upgrade options (Warschythe, Gauntlet of Fire, Hyperphase Sword & Voidblade) and 5 wargear-esque options (Sempirternal Weaev, Mindshackle Scarabs, Tesseract labyrinth, Ressurection Orb & Phase Shifter). Of all those weapons and upgrades only the Rez Orb benefits the unit. The rest of the upgrades just give the Lord extra benefits in combat or armor save.

So really, if you're looking to make the Lord improve a unit by leading it, besides adding some CC punch to the unit your only real choice is the Rez Orb and the Rez Orb is on the high end of the points scale for their wargear so it isn't exactly a steal to get a Rez Orb into a unit (which for those who aren't keeping up boosts their Resurrection Protocols to a 4+).

Crypteks can be taken plain jane if you wanted (with only a Staff of Light), but if you want to upgrade them at all, then you have to select a 'discipline' that they follow. There are five disciplines to pick from and each one costs some amount of points to take, with the only benefit being that you get an upgraded weapon instead of the staff of light that fits into that discipline's role.

Now, once you've chosen a discipline to upgrade to, you're allowed to give the Cryptek one (or both) of the listed wargear options. HOWEVER, the rules state that 'each of the wargear options can only be chosen once in each Royal Court'. So the only way you're going to get more than one Veil of Death (for example) is to take a second Royal Court and even then you're only getting a second one. So it does not look like you will be able to spam these items.

Although there are some exceptions, for the most part these wargear options tend to benefit the unit they're leading, or affect enemy units that are trying to do something to the unit. Like giving the unit assault and defensive grenades (Gaze of Flame), you already know about Solar Pulse if you've been reading my posts closely, causing damage on enemy units Deep Striking near or assaulting that Necron unit (Ether Crystal & Lightning Field respectively), reducing one enemy unit's assault move against that Necron unit by D3" (Seismic Crucible), etc. And all of the upgraded Cryptek weapons are ranged weapons.

So in general I think the basic Lord is what you take if you're trying to give the Royal Court some CC punch (or give a unit some CC punch)...besides the obvious Rez Orb choice, of course! Instead, if you're wanting to upgrade your unit to have some unique abilities and a specialty shooting weapon in it, then the Cryptek is the way to go.

C'Tan Shards: Just to be clear (someone asked), the Necrons do not have any kind of 'deal' worked out with the C'Tan shards. It doesn't state how, but they are able to control them somehow (using their super-tech) to basically point them at the enemy and get them to do what they want, but of course in game terms this isn't represented, there's no special 'rage' rule or anything forcing you to play a C'Tan a certain way.

The fluff says that the Necrons are constantly hunting down missing C'Tan shards and trying to imprison them in pocket dimensional prisons. They know that they can never fully destroy a C'Tan (only break them into shards and keep them from forming back together), but of course their fear is that the C'Tans will be able to reform and then take revenge back against the Necrons.

Every indication I get from the codex is that you'll just use the existing models to represent C'Tan shards, because if you think about how they're described now, a 'shard' is really much closer to what the old codex's power-level was for a C'Tan.

As for the 2 'Manifestations of Power' each shard must take, they each cost a different point value (between 10 & 50 points) and you can only have one of each choice in the army no matter how many C'Tan shards you take. There is a wide variety of different things that can be chosen, from powers that are roughly equivalent to some of the special rules that the Deceiver & Nightbringer had access to in the last codex and plenty of new impressive rules as well (such as making all difficult terrain on the table dangerous for the enemy or making one enemy model in base contact have to pass an Initiative test or be removed from the table). 3 of them are shooting attack choices, each obviously quite a different kind of attack than the others.

As awesome as some of this suonds, you have to temper that with the fact that shards are nearly 200 points with no options, and once you factor in the two manifestation upgrades, you're talking about a unit that is somewhere between 200-300 points (depending on which two manifestations you take).

The Ghost Ark, Doomsday Ark & Annihilation Barge are just Skimmers (so no moving flat-out). And yes, there is no reason the embarked models can't fire from the Ghost Ark as well as the vehicle's Gauss Flayer arrays, but remember that embarked vehicles cannot fire when the vehicle moved faster than combat speed (unless they disembark first).

The Monolith is a new vehicle type, a 'heavy' skimmer which means the vehicle can only ever move combat speed but always counts as stationary when firing. Oh, and the Monolith has a rule that says it can only ever Deep Strike in from Reserve.

haroon wrote:
So the monolith Must deep strike? and it doesn't have any rules to keep it from mishapping? That is pretty painful considering how big it is.

No, it can deploy normally, but if it is put into Reserve then it must arrive via Deep Strike.

KarlPedder wrote:
Are the Tomb Spydors still able to be fielded seperatly or do they operate as a unit now?

1-3 form a unit together per FOC taken.

NecronLord3 wrote:
Destroyers are 1-3? WTF? Please tell me they picked up some wounds.
And now Wraiths go to 1-6? So you make one unit useful, and the other useless. Thanks GW.

Destroyers have the same statline and the Heavy Destroyer upgrade just means they upgrade their gun.

However, they have had a considerable drop in points cost, as have many units in the codex. And let's not forget, before Destroyers tended to be the only mid to long-ranged threat in the army. That isn't the case anymore so I'd guess that it won't be quite as big a problem to have the smaller units.

Heavy Gauss Cannon is still the same, but it costs you almost double the (newly reduced) cost of a Destoyer to upgrade to one. Regular Destroyers have the Gauss Cannon, which is now AP3, but only Heavy 2.

Warscythes do not have any built-in shooting weapon.

And a Night Scythe has no weapon options, but comes with a twin-linked Tesla Desructor, which is a fantastic weapon. 24", Assault 4, S7, AP-, Tesla & Arc. 'Tesla' (as always) means that any 'to hit' roll of '6' means TWO additional hits (not sure if this means 3 overall hits per '6' rolled or not...the wording is kind of ambigious, but I'm thinking, that a roll of '6' does equal 3 hits). 'Arc' means that all units (friendly and enemy) within 6" of the target enemy unit suffer D6 S5 AP- hits on a D6 roll of '6'.

So while the AP- of the Tesla Destructor keeps it from being a premiere transport killer, the fact that you can generate all those extra hits if you roll a '6' to hit (and it is a twin-linked weapon) seems really uber-cool.

Sorry, yes the Gauss Cannon & Heavy Gauss Cannon are now Assault weapons as well. Should have mentioned that.

Tomb Blades (jetbikes) do not have any real AT firepower.

Let's not forget that Scarabs only went up a few points and are amazingly potent. If you're going to want to spam anything from the FA section, I'd guess it is them.

They still have 3A (4 on the charge) and are beasts, giving them the typical beast 19-24" assault threat range. That means if there are any enemy immobile or vehicles that didn't move within that range, they are almost certainly dead, as all you need is 30 attacks (8 bases on the charge) and with Entropic attacks each hit reduces a vehicle's armor by 1 on all facings on a 4+. So if you have 30 attacks you'd expect to reduce a vehicle's armor down to 0 (which auto-wrecks it).

And of course even if your Scarab swarm gets whittled down and isn't able to instantly wreck enemy vehicles, they can still totally weaken enemy armor this way to the point where any unit in your army is able to tear it apart with their regular shooting...so I guess what I'm saying is that 30 Scarabs in an army sounds like a great way to turn all your Anti-Infantry units into AT units as well.

Zeratil wrote:
Thanks! If you have the time, what do the particle (Beamer, Caster, Pistol) weapons do?


The Caster is the pistol.

It goes: Particle Caster
Except for the Caster, they're just the 'blast' weapon category for the Necrons (with the blast getting bigger with each type of weapon).

You do know that something hasn't been 'nerfed' when its point value has gone down more than its abilities have been reduced, right? In that case, it has actually been improved, despite the fact that its per-model abilities have been degraded a bit.

And no, Necrons are most certainly not a CC army.