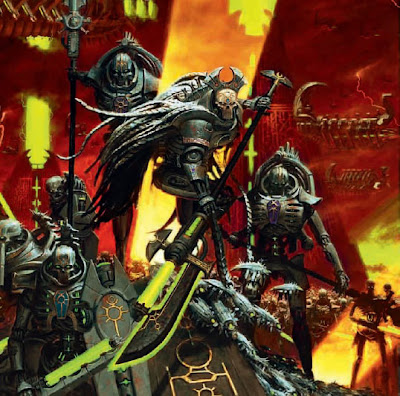 Here is the latest on the necron front. No real time to go into details, but I thought you should see it, as well as a glimpse as what may in fact be the Necron Cover art. Can anyone confirm?

A little salt required, as I dont have the codex in hand.


More via Yakface
Ressurrection Protocols returns the model to play with a single wound unless they have a Phylactery in which case they come back (the first time they get back up) with D3 wounds.

And yes, for the most part (not the C'Tan, for example) every non-vehicle unit has Ressurection Protocols, so Scarabs can come back as well now.


Wraiths are pretty darn close to being the same price and still have a 3+ invulnerable save (phase shifter) as well as a 3+ armor save.
They move as Jump Infantry but ignore difficult terrain (so do not have to take difficult or dangerous tests).
Their Attacks are rending and they have a few options (each model can take one): Particle Caster (pistol), Whip Coil (lash whip) or Exile Beamer (a 12" Heavy Weapon that causes a raondom model in the target unit to be removed from the table if it fails a Strength test).

I have a hard time seeing how an Exile Beamer could be useful since it is a heavy weapon (especially since its the most expensive upgrade of the bunch) and most models you'd realy want to remove instantly (like big ICs, Monstrous Creatures) tend to have a high Strength value anyway.


When it comes to Necron AT, the thing you have to remember is that you're still dealing with an army where most units (those with Gauss weapons) have the ability to inflict glancing hits on vehicles and now you have Scarabs (and a few other models) with Entropic Stirke which allows you to reduce the armor of enemy vehicles, so I do think those two things potentially change how much AT firepower a Necron army has to have compared to traditional armies.

There are no units walking around with a bunch of AT firepower in them like you see in some other codexes (such as Long Fangs), but again, I don't think you're quite as reliant on these types of units because you have a few different avenues to get the same job done.

• The Stormlord has that Lightning that occurs when Night Fighting is going on, which hits vehicles on a D6 roll of '6' with D6 S8 hits that go against the side armor of vehicles that are hit.

• Most models with a Warscythe are striking at S7 in combat with them (which can certainly punch most vehicles). And when on a Command barge ICs can make 3 attacks on an enemy vehicle's back armor they pass over with their movement.

• Lychguard with Dispersion Shields could theoretically bounce back AT fire off their shields onto enemy vehicles within 6" (but there's no reliability there).

• C'Tan shards can take a 24" S9 shooting attack if they want. And of course the C'Tan & Tomb Spyders are both Monstrous Creatures (S7 & S6 respectively) which means they can still tear vehicles apart in CC.

• Scarabs of course (and some other models with special close combat weapons such as the Void Blade) have Entropic attacks.

• The Monolith still has its 24" S8 Particle Whip Large Blast.

* Annihilation Barges & Night Scythes both have the twin-linked Tesla Destructor, which despite being AP-, should still do a decent job on low armor vehicles (with a S7 and 4 shots and the potential for more hits if you roll '6's to hit).

• The Doom Scythe of course has the Death Ray. I actually read its rules wrong before...its not quite as good as what I wrote before. It does a number of hits on a unit equal to the number of models in the unit that are under the line. So if a unit has 5 models under the line it takes 5 hits, but if a unit is only made up of a single model, then it is only taking 1 hit. Of course the hits are S10 AP1, so its still pretty nasty.

• Generic Overlords & Destroyer Lords can take a Tachyon Arrow, which is like a super version of the Hunter-Killer missile. It is one-use, but is S10 AP1 with unlimited range.

* One flavor of Cryptek has a 36" S8 attack, another has a 12" Assault 4 attack that hits like Haywire Grenades on vehicles (2-5 = glancing hit, 6 = penetrating hit), while another has a S6 single shot with unlimited range that is an Entropic attack (so will reduce enemy vehicle armor by 1 if it hits).
10/18/2011
Natfka
Necrons, Rumors