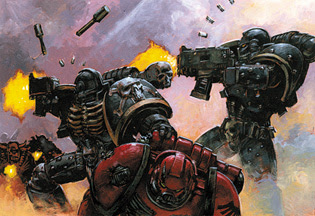 Out of all the rumors that try and tackle 2012, I would have to say we have a bad mix on our hands. Chaos Legions, Eldar, Tau, Black Templar, Dark Angels, and 6th edition is just too much for one year to handle. So when I see rumors starting to break this down, it just might start becoming a little more logical.


This rumor set starts off with a codex release schedule and then goes into 6th edition rumors. Marik puts a little bit too much into whether or not this source can be trusted, when the information can often speak for itself. "This is a new source take with salt" is all that is needed. Anything longer makes me start to think whether or not the rumor is completely made up, which was my first thought on this one. Instead I am going to attribute this to just lack of confidence and getting to the point. (not meant as an insult Marik if you read this).

via Marik Law
Can't name my source, but this person is a fairly new source to me so please take this with a large helping of salt. I can't even be sure that I can trust this person 100% yet. We'll see if I can trust him if what he said actually comes to pass.

The following are supposedly to be released in 2013, but I was not given a specific release order. With that said, the following is NOT in order of release.
Codex: Dark Angels (2013)
Codex: Sisters of Battle (2013)

He/She mentioned that there would be a third Codex in 2013, but couldn't give me specifics as to what it was (or was unwilling to at this point in time). He/She mentioned quite a lot of other things as well (6th Edition, narratives, etc), but I don't want to push too much out there when I don't know if I can trust this person yet or not. So again, please take this with a grain (or a spoonful) of salt.


6th Edition via Marik Law
He/She wouldn't go into specifics, but said that a lot of what had been said online was true, some of it wasn't entirely correct, and some of it was correct but just worded extremely poorly to a point where it made the rule seem more complex than it actually was or made the rule seem somehow different. He/She said he/she had played games using the new rulebook and said that the games didn't take much longer to complete than they already are, if anything they were making a point that some of the more convoluted rules have been streamlined and some of the rules that were "too basic" got changed as well. He/She said that, if anything, the game feels much more strategic with the new rulebook, though he/she did say that some of the rules take "a bit of getting used to."

EDIT: Codex books won't be invalidated by the new rules apparently, but the new rulebook will come with an FAQ section for each already existing army to clarify any confusion or mix-ups in concern to the new rules.

As for why they chose certain armies over armies that needed it more (Dark Angels, Black Templars, etc), it was apparently due to lore/fluff reasons. Chaos is going to be a major threat come 6th Edition to everyone, not just the Imperium, and apparently they (Chaos) will have a front against the Tau Empire, hence why Tau are getting a release before-hand. The perspective/narrative is also changing apparently and it won't be only or heavily Imperial, he/she said that GW wanted to make some of the other "good" races (Tau Empire, Eldar) feel just as important as the Imperium when it comes to lore/fluff and the fate of the galaxy. This was apparently some of the reasoning behind why Tau Empire and Eldar are getting books before armies like Dark Angels and Black Templars.

As for the actual Tau Empire rules, all my source was willing to say was that a good deal of the rumours currently on the internet about Tau are true, but that some were false or just poorly worded, and that he/she couldn't give out or confirm/deny specifics as he/she "might get in trouble." Apparently, some GW staff are allowed to leak certain details to the public via the internet, but are very specific as to what is allowed to be said by who.
10/25/2011
Natfka
Rumors