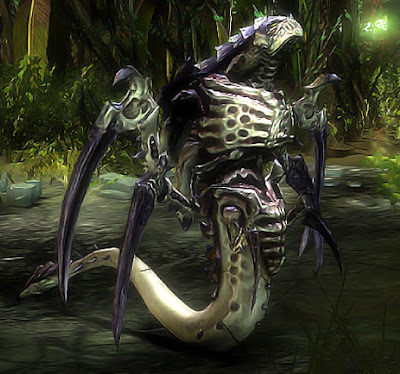 As for Chapterhouse, they kind of filled a niche that GW was taking far too long to release. Perhaps this was the result of their lawsuit, and the cause of a hold on the release of further tyranid models. Of course this is speculation by myself. I am no expert in the law, just using some logic.

I hope to see some tyranid models, as tyranids seem to be the latest shop talk I have been discussing. Wouldn't that be a great way to start the new year?

Please take these with the required salt

via sharkticon
According to his contact in WD contact there is going to be a Tyranid update in the magazine similar to the Vampire Count one that happened recently. There will be a new unit included in the issue that is designed to fill gaps in the current codex, with the rules being written by Phil Kelly.

via Straightsilver
Unfortunately GW were unable to release their Tervigon kit (see my other comments elsewhere) as they had intended and so are having to make do with a White Dwarf bolt on.
Essentially the WD rules will be a Tervigon and something else, and the kit will make both models, a bit like the new Ogre Kingdoms monsters.
At least this is what I have been told, don't know if it's true or not.
There may also be another much larger Tyranid kit coming out too.....

In terms of US copyright a concept or idea cannot be copyrighted, so the idea of a Doom of Malantai model, or a Tervigon, or a jetbike seer council weren't protected until the models were released.

When Chapterhouse beat GW to it by making these models it appeared it may affect future GW releases and on legal advice GW held back some of their releases until they could prove unequivecally that they had total ownership.

kitch102 wrote:
Andrew Kenrick, our wonderful WD editor himself, and one of his colleagues (Phil I think? Not sure, will find his picture and confirm) hinted at a possible Tyranid release. This will not be the fabled 2 wave, but will fill a gap in the codex. However he also said "but then it may not be a gap filler, but an altogether different model with it's rule set to be released in white dwarf". Nid players... don't read too much in to this, there aren't enough facts to get excited about, but equally I don't think someone in the know such as Mr AK would say sometihng's coming when it's not. Again, no dates were hinted at.
10/03/2011
Natfka
Rumors, Tyranids