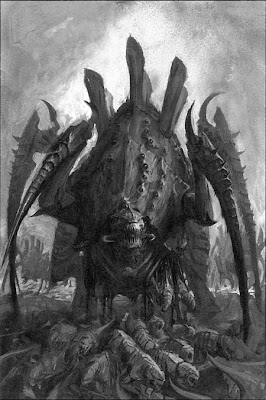 So here is a very hot topic related to the hold ups on several Games Workshop releases that we really have been wanting to see. Models like the tervigon and thunderwolves seem to be held up on a legal action.

I know legal issues are often the culprit of why things happen the way they do, could this also be why the rumor mill has been clamped down so hard? Fear of other companies like Chapterhouse getting a hold of images and releasing models  before Games Workshop has the chance? Logic would dictate a very reasonable reaction to protect the company.

via Kroothawk:
guess you all are aware that GW started a lawsuit against Chapterhouse to crush the company, because GW feels Chapterhouse is infringing copyright and trademark laws. But instead of going right for the kill, GW lawyers have not been able or willing for almost a year to even state what GW's IP is, that Chapterhouse is accused to have been copying. The lawsuit itself is NOT the topic of this thread.

But GW seems to have made changes in their release schedule because of the lawsuit.

1.) A.o. Tyranid and Eldar releases are on hold until the legal issues are settled.

2.) Esp. the tyranid second wave including the tervigon kit will not be released as planned. GW will invent a new similar monster with WD rules and release it in that context.

4.) GW gets back to its single release schedule, with every essential unit released at the start, with only some characters following later. The Ogre Kingdom release is a perfect example for that strategy.

Why? At first GW lawyers thought every name, concept and design mentioned in one of their books is per se protected and nobody may do a model based on that without their explicit permission. This proved to be wrong, because only models are protected, not ideas and concepts. Now GW lawyers fear that if they release Tervigons, Thunderwolves etc, the third party companies already doing these might successfully sue them. This is probably wrong as well, but the basis of GW's future strategies. Be aware that StraightSilver mostly presents GW's point of view (plus his own of course), so that the legal situation might be totally different in reality (maybe we have to wait for the end of the Chapterhouse lawsuit). Of course nothing here is officially confirmed by GW (only a hint at the new Tyranid monster), but I am convinced that these rumours are true.


via Straightsilver with excerpts from kitch102, killcrazy
And Eldar will be a ways off just yet. Ther are all sorts of legal issues with Eldar and Tyranids that has meant they have been delayed, but that is a complicated issue for another thread unfortunately.

A lot of GW releases are on hold until the whole Chapterhouse mess is resolved. There are issues over copyright which until resolved mean GW won't release some stuff until it's all over which won't be any time soon. This specifically relates to two models in the Chapterhouse range, but I don't want to derail this thread with that. However GW won't release some models but not others and so is having to hold off until they can release them all as a wave.

I cannot obviously corroborate it, but I have heard that is the case from credible sources, but again stuff said over a pint isn't always that reliable, but these are people that would normally know.

And yes that is apparently why the Tyranid wave has been held up and also why GW may never make Thunderwolves. Basically the third party companies that got there first can now challenge GW over copyright, not something they would ever allow to happen.

As I say it may only be a rumour, and unfortunately I can't specifically say where most of my rumours have come from in case I drop anyone in it but they do work for the company and aren't a black or red shirt.

And it is specifically a couple of things, but these are fairly important ones.

It's just that Chapterhouse is attesting that it owns the copyright on a couple of GW concepts because it produced the models first. GW are challenging that but don't want to release their models in case Chapterhouse then challenge ownership.

Of course always take with a pinch of salt, but rumours are rumours I guess.

It's more complicated than that.

There isn't a single element of the Doom Seer's design that isn't (a) different to the GW Far Seer models and (b) modelled on existing historical designs.

Despite that it is clearly a "not" Far Seer, based on its overall similarity to GW Far Seer models, if you have seen a GW Far Seer first.

The question the court must answer is whether GW's co-option of historical elements into an overall design is sufficiently original as to create an entirely new copyrightable work, and secondly if this has been achieved, have CH violated the putative copyright by copying the overall design with different individual elements.

You can see how complex these questions can be.

Unfortunately GW were unable to release their Tervigon kit (see my other comments elsewhere) as they had intended and so are having to make do with a White Dwarf bolt on.

Essentially the WD rules will be a Tervigon and something else, and the kit will make both models, a bit like the new Ogre Kingdoms monsters.

At least this is what I have been told, don't know if it's true or not.

I just thought I would clarify some of my earlier posts, but of course am concsious of derailing this thread so don't want to go too off topic.

I have also decided not to post further on the subject as I do not want to add too much speculation or more importantly get anyone into trouble.

Anything I have said may well just be conjecture or the opinion of an individual, but as they are still deeply involved with the company I do not want to implicate them.

So I will expand upon my earlier comments but then leave it at that.

GW do not essentially have a problem with third party products or companies that produce them and in most cases these companies enhance GW sales as you need GW kits to use them.

The majority of third party companies have also been very careful not to use GW trademarks, or step over the line with GW's IP.

Generic backpacks or vehicle accessories do not infringe GW copyright, neither do seperate heads that can be used on GW figures for example.

Even companies who make more specific products such as Space Marine accessories have been very careful to not directly market them as such.

However when a third party manufacturer starts selling Salamnder Shoulder pads, or Space Marine Black Templar Rhino doors they are crossing the line, but only to the point where GW would advise them to change their terminology on their online store and to stop using GW trademarks.

Unfortunately Chapterhouse flouted this, and even posted in the news section of their website that they were doing nothing wrong and that GW should essentially take them to court (I'm paraphrasing).

However that still wasn't the main problem with Chapterhouse.

Once they moved away from creating after market products compatible with GW kits and started producing original sculpts based on GW IP they crossed a line.

In terms of US copyright a concept or idea cannot be copyrighted, so the idea of a Doom of Malantai model, or a Tervigon, or a jetbike seer council weren't protected until the models were released.

When Chapterhouse beat GW to it by making these models it appeared it may affect future GW releases and on legal advice GW held back some of their releases until they could prove unequivecally that they had total ownership.

This of course will be decided in court, but in defence of GW Chapterhouse bought this on themselves, they were given the opportunity to comply with GW's requests, but chose instead to go to court.

In terms of how this affects GW some explanation of how the company plans its releases is required.

There is a reason GW releases miniatures in waves.

It is purely a business reason dictated to them by their financial department.

A company like GW needs consistent sales throughout the year, and also needs to show year on year growth. It is a public company and therefore very conscious of its share prices, and consistent sales are by far the best way to keep investors happy.

If they release lots of cool new stuff all in one go then they willl get sales bubbles, which look bad on their financials. It is better for them to have releases spread across the year which therefore spreads their sales.

There is also the fact that they will have invested much time and care in their new releases, and to release them all in one hit menas they will not stay fresh, but also means they will need to create more new releases to spread out that year which they do not have the resources for.

It is also common to have a release planned and to hold it back until it makes more financial sense, and this is why some expected releases seem to disappear, only to reappear later when the company needs to make some sales during a slower quarter.

However releasing figures in waves can leave huge gaps in Codexes, and not every gamer is prepared to wait. This didn't used to be a problem as people would buy GW kits and convert them, but now they can simply buy them from third party companies.

GW are fullly aware of this, and are looking at the way they release things, and make changes. Dark Eldar were an example of this, with the entire range being released in a comparatively short space of time. They were released in waves, but they were very close together so that there were no long waits. Ogre Kingdoms seem to be following the same format, with their models being released over two quarters.

However this does mean that there will be sales bubbles and GW then have to make up the shortfall elsewhere. This unfortunately often results in a price increase which GW then get a lot of flak for.

And it's also possible that Dark Eldar were too successful. Their sales beat expectation, but may be the reason another release has been put on hold (won't say which one but I think it's obvious). Having all your 40K sales in one year would then result in negative growth the following year unless GW had more products to release.

As I say most of what I am saying is based on conversations with somebody who works for GW, and may just be his or her speculation or opinion but I originally posted this in the rumours section for that reason.

I just wanted peopl to see the bigger picture where the Chapterhouse lawsuit was concerned. I don't want to demonise them, I just think if they had gone down the same path as other third party companies they could have avoided the litigation, but they decided to let it get to court, which wasn't GWs intention, but they felt they had no choice but to protect their interests
10/05/2011
Natfka
Rumors