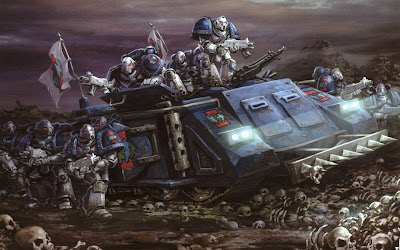 Taking a brief break from the Necrons that have dominated this week, it was time to sit back and enjoy something different. It was good timing that the following rumors for 6th edition have resurfaced. So lets get into them.

I am very excited for these rumors, not just the new BS taking into account the speed of the target, but flyers and less randomness in our games (can we say that this is a GW response to the competitive state of the game?)

These are rumors, so please take with a grain of salt.

* two starter sets, each with rules, dices, movement markers, mission booklet, one with Dark Angels and fitting scenery, the other with Black Legion and Chaos scenery. You can combine both to play the campaign or use one set alone to play a selection of dumbed down scenarios against every other force, first starter set that comes with a model for a well established special character

* 6th edition is finished rulewise for some time now, the overall goal is to fix some of the long time problems of the game system. Expect a lot more fundamental improvements than last edition. The rules were even more ambitious at some stage of development, but didn’t get approved as they were too far away from the established rules. The main designer left company and his successors brought the rules back in line with the existing codexes. The rules are nonetheless a bigger step forward than from 4th to 5th. Changes are so big that the next edition relies partial on erratas to fix old codexes. Development relied heavily on feedback of veteran playtesters. You can see some results of this new approach by the way the FAQs were handled in the last months. All codexes since Codex Tyranids were written with the new rules in mind, especially the new mission and reserve structure.

* The main design goals are: one book to rule them all, heroic characters, visceral combat, streamlined mechanism, cleaned up presentation and strategy before chance

* strong narrative focus on Chaos, perspective shifting from the Empire to the struggle between free races and the Warp

- before the game there is a bidding contest for the opportunity of the first turn, if you bid more strategic points you can go first, but the enemy can spent these points on stratagems as in Cities of Death: 22 generic stratagems – for example for one point you can decide on night fighting or place an automatic gun, for four you can shift your reserves, most expensive stratagems are at 12 points and are really drastic, every unspent point can be used once a game for a reroll


Some more examples for the development doctrines


One rulebook for all:
- flyer rules are incorporated in the main rules

- modular rules, core rules can easily be expanded by narratives rules or another expansion set


Heroic characters:
- independent characters more powerful, armour save and invulnerable save at the same time

- some weapon types are specialized in taking out specific unit types and are incredible good at doing this (sniper vs. infantry without armour), but on the other hand ordnance vs flyer isn’t going to do much


streamlined:
- no more random movement at all

- wound allocation like 4th edition on unit basis, but attacker can chose every 5th wound to go to a single model (sniper weapon every second wound)

- artillery is normal immobile vehicle squadron, crew has no other game purpose than to be a counter for rate of fire and attacks

- no more difference between leadership test and morale test


less randomness, more strategic options:
- more elaborate reserve rules, can nominate turn of arrvial and has only small change to arrive earlier or later, or can intervene behind enemy lines, arrives randomly but can hinder enemy reserves, must be distributed evenly between turn two and three, later arrivals only randomly

-no roll for first turn

-deep striking units more than 18” from enemy away don’t scatter, but landing in 6” is much more dangerous

- movement impairing effects from pinning weapons even if morale check is passed (if roll is above halved Ld), Fearless not immune to this, but only effected if rolled over full Ld

- more reactions to shooting than going to the ground depending on unit type and special rules. bikes can evade (3+ cover as same as before, but cannot assault or shoot next turn), jump troops can fly high, units with Stealth can attempt to vanish, …
10/22/2011
Natfka
Rumors