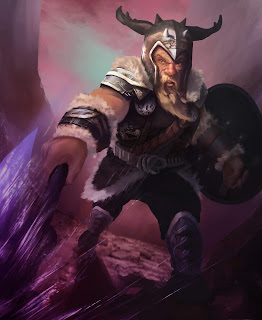 CREATING THE FACTION
What we’ll do here is recreate a faction we have used for in-house play testing, although this one has not been used since the Open Beta. Essentially, we will be creating them from scratch.

NORKRAAG DWARVES
These Dwarves protect their realm from an ancient foe, descendants of the Great Leviathan. They are vigilant. Their watch is eternal. They guard the most northern of the mountain peaks.

We start off with our first traits from the Genetic Mutation Category. 0-2 traits
Dwarfism Primary Traits
Dwarf 4pts: Species Variant (grants an additional Dwarfism Trait), Increase Defense 1, Decrease Command 1
Dwarfism Secondary Traits
Dwarven Constitution 6pts: Increase Toughness 1
Dwarven Heavy Plate Armor -/12 (Armory Trait): Heavy Plate Armor
Note: I used a couple of characteristic traits here to give the mountain dwarves a sturdier frame and then gave them some really heavy armor (which is cheaper to acquire as a dwarf than elsewhere). Armory Traits do not count towards our model point cost, as it is equipment, but only the squads we equip with the Heavy Plate Armor will pay the point cost for it when we prepare for a battle. This just grants the entire faction the opportunity to equip it if we want.
Note: That heavy armor will slow down movement and might just be for elite and/or cavalry units.

We then move on to traits from the Environmental Adaptation Category. 3-4 traits
Cultural and Social Adaptation Primary Traits
Councils 2pts: Increase Squad Sizes (Class Levels 1 and 2)
Mercantile Society 0pts: Abundant Resources 1 (makes our common equipment a lower point cost.)
Cultural and Social Adaptation Primary Traits
Legendary Heroes 3pts: Bonus Class Traits 2 (level 3 Classes)
Animal Domestication Primary Trait
Cavalry 2pts: War Mounts (these will be my Mountain Goat riders)
Note: This was a tough one deciding whether or not to add cavalry options here or save it for my classes to expand into. In the end, I decided to just add them here, giving the entire faction access to them and making it easier for me to expand upon them later and possibly give the mounts addditional traits. Being Large creatures they will be able trample Medium models and smaller during charges!

Then we move on to traits from the Knowledge and Science Category. 1-2 traits
Armor (Personal) Primary Traits
Advanced Armor -/10 (Armory): Advanced Armor 1 (to select “Lightweight” to customize my armor)
Advanced Melee Combat Weaponry Primary Traits
Martial Axes (Armory): Martial Axes -/4pts, Battle Axes -/6pts
Note: The idea here is to have the to give my infantry squads more lightweight. The improved axes do extra damage, making the axe wielders deadly as they cleave through the enemy. The main issue I see here so far is that while extremely tough, that armor is expensive! We will keep it on the more elite guys and perhaps some common armor elsewhere. Later we can take a trait to reduce the cost of that armor some.

UNIT CLASSES
We have created the faction with their army-wide rules. Now it’s time to create our Unit Classes. The number of classes at each level are determined, for the Humanoid Domain at least, by looking at the Skill Characteristics (Martial, Ranged, and Defense) for your species. We will be able to create the following number of Unit Classes based on our characteristics of the Norkraag Dwarves.
• Standard (Level 1) – 4 (our highest characteristic)
• Elite (Level 2) – 3 (our second highest)
• Leader (Level 3) – 2 (our third highest)
• Unique (Level 5) – 1 (you may only create one Unique class)


STANDARD UNIT CLASSES - LEVEL 1
Standard units form the backbone of a military force.
Standard Unit Classes are built upon the Base Species only plus additional traits.
Point Cost: Base Species + Additional Traits
Wounds: 1
Base Attacks: 1
Stats: No increase except through selected traits.
Traits: You may select a single trait for this class, adding the cost of the trait for each model.
Maximum Class Traits: 3 (as each class develops you may buy additional traits, up to a maximum of three)
Chain of Command: One model per squad may be upgraded to a sergeant or squad leader, at the cost of 5pts for +1 Discipline. This allows the squad size to be larger based upon the upgraded model’s Discipline, even if killed in battle.

NorKraag Defenders (Level 1 Class): 21 points (+ equipment) per model
·         Class Trait: Adaptive Advantage 4pts: Increased Ranged 1
Note: Standard Crossbowmen will be used to provide ranged support. Defenders have a Ranged Characteristic of 3. A good class that has lots of options to add to if we want from Mission Awards and Progression Points.

Mountain Scouts (Level 1 Class): 19pts (+ equipment) per model
·         Class Trait: Recon 2pts: Recon
Note: Recon allows for movement during deployment to spot enemy positions and gain the Initiative for the first round. We might later add infiltration to this class.

Norkraag Soldier (Level 1 Class): 21pts (+ equipment) per model
·         Class Trait: Adaptive Advantage 4pts: Increase Martial 1
Note: The standard melee soldier for our Dwarves. Soldiers have a Martial Skill of 4. We have the options here to mount them on our Mounts (mountain goats) and equip them from their good selection of equipment available from the Faction Armory.

Kragborn Giant (Level 1 Class):  35pts (+ equipment) per model
Class Trait:
·         Giant 8pts: Increase Toughness 1 (does not stack with Dwarven Constitution), Increase Strength 1, Decrease Discipline 1, Decrease Command 1, Increase Model Size 1.
·         Bonus Trait: Massive Strength 10pts: Increase Strength 2, Decrease Defense 1
Note: Kragborn Giants are Dwarven offshoots whose growth hormones are out of control, resulting in massive growth in both size and muscle. Kragborn Giants have a Strength of 5 and are Large models. Discipline is 2, resulting in smaller squads and lower morale, with less wits about them to maintain any sort of Command (which is now 1).

ELITE UNIT CLASSES - LEVEL 2
Elite warriors are something to be feared on the battlefield.
When you start to build an Elite unit class, you must start with either the Base Species or one of your Standard Unit Classes from which to build upon. That point cost is multiplied by two. Any Class Traits or abilities from the Standard Class are included in the new Class and do not count towards the Maximum Class Traits. From this you will add new traits, increasing their abilities.
Point Cost: Base Class/Species (x2) + Additional Traits
Wounds: 1
Base Attacks: +1
Stats: May take a +1 Characteristic of your choice for an additional +10pts. This stacks with existing increases from other Branches.
Traits: You may select a trait for this Class, adding the cost of the trait to each model.
Additional Trait: A second trait can be added to this class at the cost of the trait + 3pts
Maximum Class Traits: 4 (as each class develops you may buy additional traits, up to a maximum of four)
Chain of Command: Individual models may be separated from an Elite or Leader unit to join a Standard or Elite unit. Up to 1 per unit.

Norkraag Centurion (Level 2 Class): 59pts (+ equipment) per model
We can build these off the faction traits or expand on an existing class, so I’ve chosen to build them off the NorKraag Soldiers.
New Class Traits:
·         Class Trait: Martial Mastery 8pts: Increase Martial 1
·         Additional Trait +3pts: Elite Training 6pts: War Veterans
Notes: Centurions have a Martial 5 and Defense 4, making them hard to hit and they will be difficult to kill as well if given Heavy Armor. War Veterans gives them a nice advantage during the Combat Situation for coordinated attacks.

SkyeMage Acolyte (Level 2 Class): 56pts (+ equipment) per model
Those that spend time alone in the Mountains sometimes come back with extraordinary wisdom and searching for the powers of the Sky. We are building these off of the Norkraag Scouts.
New Class Traits:
·         Class Trait: Wizardry 3pts + Arcing Bolt (Power) 8pts
·         Additional Trait +3pts: Gifted Willpower 4pts: Increase Willpower
Note: These traits give our SkyeMages a Willpower of 3. When channeling, they will have a good chance to cast a short or medium range Electric Bolt. Critical hits from this power can arc outwards, hitting multiple opponents and it can be used in melee or thrown for ranged combat.

Combat Leaders (Level 2 Class): 49pts (+ equipment) per model
These are another class that we will build off the Norkraag Soldier base to help us command the field.
New Class Traits:
·         Class Trait: Squad Leader 2pts: Squad Leader 1
·         Additional Trait +3pts: Taking the Initiative 2pts: Taking the Initiative 1 (helps when challenging Initiative)
Note: Trained in battle tactics, Combat Leaders will most often be combined into other squads using their Chain of Command to help fight for the initiative where it is needed.

LEADER UNIT CLASSES - LEVEL 3
Leaders are often well-trained soldiers and tacticians.
When you start to build a Leader Unit Class, you may start with either the Base Species, a Standard, or an Elite Unit Class, multiplying their point cost by two. Any Class Traits or abilities from the Standard Class are included in the new Class and do not count towards the Maximum Class Traits. From this you will add new traits, increasing their abilities.
Point Cost: Base Class/Species (x2) + Additional Traits
Wounds: +2
Base Attacks: +1
Stats: +1 Characteristic Increase of your choice for no additional point cost, these can stack with existing increases.
Traits: You may select a single trait for this class, adding on the cost of the trait for each model.
Additional Trait: A second trait can be added to this class at the cost of the trait + 5pts
Maximum Class Traits: 6 (as each class develops you may buy additional traits, up to a maximum of six)
Chain of Command: Leader Unit Classes may individually join Elite and/or Standard Unit Classes

SkyLords (Level 3 Class) future class to build from SkyMage Acolytes.
Notes: A more powerful Wizard with longer range Lightning and Air Shield Powers will be built later on through Mission Awards. Possibly even riding a Giant Eagle (Monster class) to be built.

UNIQUE UNIT CLASSES - LEVEL 5
Inspiring leaders or legendary warriors, these are the focal point of your faction.
When you create your Unique Classes, you may start with a Standard, Elite, or Leader Unit Class, multiplying their point cost by two. Any Class Traits or abilities from the Standard Class are included in the new Class and do not count towards the Maximum Class Traits. From this you will add new traits, increasing their abilities.
Point Cost: Base Class (x2) + Additional Traits
Wounds: +1
Base Attacks: +1
Stats: +2 characteristic Increase of your choice, these can stack with existing increases.
Traits: You may select a single trait for this class, adding on the cost of the trait for each model.
Additional Trait: A second trait can be added to this class at the cost of the trait + 10pts
Maximum Class Traits: 7 (as the class develops you may buy additional traits, up to a maximum of seven)
Chain of Command: A Unique Unit Class may take a +1 Command at the cost of +15pts
Heroic Inspiration: Inspirational bonuses grant other models within the unique model’s command radius (command characteristic in inches) a +1 bonus to Discipline, Willpower, and Command.
Unique models may join other squads.

The Watcher (Level 5 Class): 262pts (+ equipment)
The ultimate watcher of the mountains – a massive cyclops.
Wounds: 7
Attacks: 3
Model Size: Huge
New Class Traits:
·         Class Trait: Cyclops: 8pts: Ethereal Sight, Night Sight, Enhancement Combat Situation 1, Decrease Ranged 1
·         Additional Trait +10pts: Sweep Attack 6pts: Arc Attack
·         Bonus Characteristic: Increase Toughness 2
Note: The Watcher will have a base Toughness of 6 and a strength of 6, lots of wounds, and an arc attack to sweep away lesser foes. Able to see into the Ethereal and darkest night, this cyclops will be terrifying to recon with for large games.

In conclusion, the NorKraag Dwarves have lots of growth potential as they progress through the 1st Age. With the strength of the Giants and fortitude of the Dwarven forces the NorKraag should be able to handle quite a few of the challenges ahead.

Next Up: A Look into the Future at Vehicle Creation for the 2nd Age!