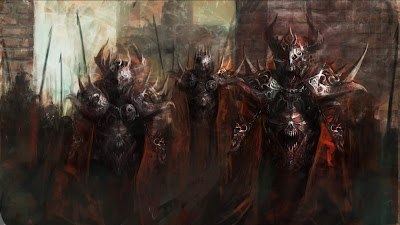 Update #14 for The Genesys Project Kickstarter this time including the last of the Domain Primers on how to create your factions.

To find out more about the current (successfully funded) Kickstarter and dive in to support the project, just follow the link here. https://www.kickstarter.com/projects/thegenesysproject/the-genesys-project-the-birth-of-genesys


PRIMER: CREATING THE FEY
The Fey exist outside of reality and are also the most different when it comes to creating a faction for them. These are the Angels, Demons, Elemental, and much more. They are Eternal.

WHERE THE FEY EXCEL
The Fey are often highly specialized within their Spheres of Influence. While their Starting Characteristics are typically lower than the other Domains and their Traits heavier in point cost, their focus and unique abilities make their incursions into reality a definite challenge to the other Domains in all areas.

THE PATH OF LIGHT, DARKNESS, AND TWILIGHT
The Fey originate from beyond the Ethereal. Theirs is a realm of magic, light and darkness, primordial and refined. For the Fey, Good and Evil are tangible and pure. It is because of this that they must choose a Path. Illuminated on the Path of Light, veiled on the Path of Darkness, or within the Shadows of Twilight.

INSIDE THE SPHERES OF INFLUENCE
Traits: In each Sphere of Influence are Lesser and Greater Traits, unlocked as normal for the Fey requiring a Lesser Trait within that Sphere to unlock a Greater Trait. You may take traits from multiple spheres or specialize within a single sphere of influence to gain a bonus.

Powers: Also, within each Sphere are powers. Powers are the spells and magic that all of the Domains attempt to reach through various forms of channeling and as such can be dangerous for non-fey to cast. The Fey, however, have direct access to these powers and are able to customize or modify the powers during gameplay. This means a power can be strengthened, or a power altered to have a stronger or larger effect radius as needed.

LESSER AND GREATER FEY
All Unit Classes for the Fey are divided into Lesser and Greater Fey. Lesser Fey are only capable of having Lesser Traits and Powers. Any Greater Traits from Faction/Species Traits are not acquired by the Lesser Classes.

FEY OPPORTUNITIES
The Fey are as varied as are their Spheres of Influence. They can control an array of powers and have access to otherworldly abilities that can change the look of the battlefield, alter reality, and even tempt time itself.