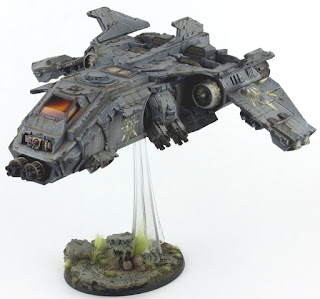 Warhammer 30k, 40k Fire Raptor Gunship from Forgeworld is on the NOCF Summer Raffles. Need or want one? Now is your chance to get in on this charity raffle and for a few dollars you can get in on the opportunity to win this an other raffles going on now. You don't need to be present, NOCF will ship the winners their miniatures!

The Fire Raptor Gunship is a specialized variant of the Storm Eagle known to have its origins in the Imperium’s dim and distant past. The vehicle is configured to maximize ammunition stowage in order to feed the voracious appetite of its numerous weapons and this is achieved by sacrificing the Storm Eagle’s transport capacity.

The secrets of the Fire Raptors construction were lost sometime after the Horus Heresy, but Fire Raptors are now being fielded in increasing numbers across the countless war zones of the 41st Millennium, suggesting that an as-yet unidentified Adeptus Mechanicus Forge World or Adeptus Astartes Chapter Forge has come into possession of a complete STC imprint.

Join us in thanking Wes Cogdal of Stiff Neck Studio. Wes is one of the founding members of the NOCF Artists’ Consortium, tracing his participation back to one of the three original armies raffled in 2013.