Stretch Goals Revealed: Expanding Upon the Humanoids and Fey 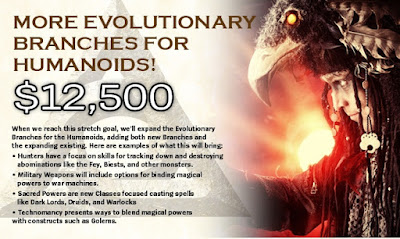 These are very cool and fun options that would be great to expand the Birth of Genesys Into. Whether it's hunting down abominations from your society, expanding upon Military Weapons such as cannons or even a Scorpio, there are some great things ahead for the Genesys Project. Check out the latest and get discover just where the Genesys Project is ready to go.

If you are a supporter already for the game..... Please Share with your gaming groups and friends. If you are not yet supporting the game.... Now is the time to show your support.


You can check out the campaign here
https://www.kickstarter.com/projects/thegenesysproject/the-genesys-project-the-birth-of-genesys

I'm very excited that we've almost reached our funding goal, and now it's time to reveal the first of our stretch goals that will help fund the expansion of The Birth of Genesys book. 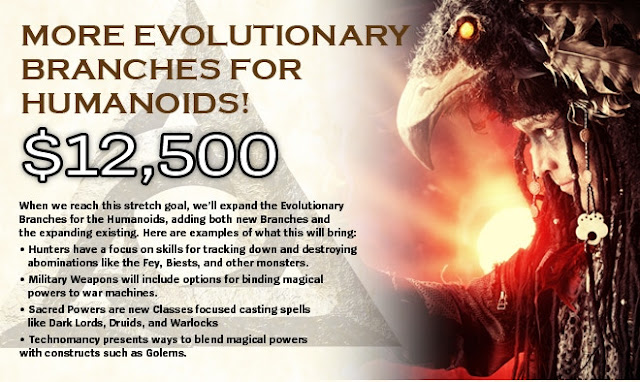 The first Stretch Goal is an expansion of the Humanoid Domain. It expands upon the Evolutionary Branches, both expanding existing branches and adding completely new ones. Here are examples of what this will bring:

• Hunters - Hunters focus on skills and traits that help them track down and destroy abominations like The Fey, Biests, and other monsters that threaten their existence.

• Sacred Powers - we'll add new methods for casting powers, including:
- Dark Lords - able to channel energy through others (including the enemy) to power their spells.
- Druids - able to draw power from the land, they gain bonuses for casting from significant terrain features.
- Warlocks - able to use dark rituals to fuse themselves with energies of The Fey.

• Technomancy - you'll be able to combine Ancient Artificers with Arcane and Faith Powers to create items of power and magic. This goes beyond making Arcane Wands and Staves, into Faith Iconology and Artificer Construction (think building your own golems). 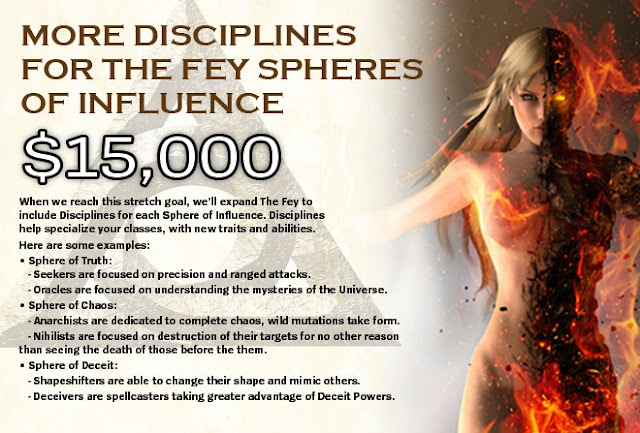 The second Stretch Goal will provide an expansion for The Fey Domain. It expands The Fey to include Disciplines for each Sphere of Influence. Disciplines are used to specialize your classes with new traits and abilities. Every one of the many Spheres will have two disciplines. We'll also be able to increase the number of spell "powers" included for The Fey. Here are some examples:

- Seekers - focused on precision and ranged attacks. These guys rarely miss their mark.
- Oracles - focused on understanding the mysteries of the Universe, great spell casters.

• Sphere of Truth Power
- The Oracle's Eyes - creates floating eyes in the Area of Conflict to reveal infiltrators and scouts.


Chaos
• Sphere of Chaos Disciplines
- Anarchist - dedicated to complete chaos, wild mutations take form and permanently change the Anarchist.
- Nihilist - focused on the destruction of its target for no other reason than seeing the death of those before the them, reducing their ability to focus on objectives or defensive formations.

• Sphere of Chaos Power
- Consuming Chaos - a dark, churning smoke of chaos writhes outwards to consume the target of this power. This power seeks out the weakest of its victims’ characteristics and attacks it.


Deceit
• Sphere of Deceit Disciplines
- Shapeshifter - able to alter, mimic or change their shape, amorphic beings are able to hide amongst   us.
- Deceivers - spell casters of great strength are able to take greater advantage of Deceit Powers.

• Sphere of Deceit Power
Changing Landscape - The battlefield is not as it appears, with terrain being moved and altered.


As well as revealing these first two Stretch Goals I'm also excited to post up the second of my Domain chats with Josh. This time we talk about creating a faction from The Fey Domain. Please check it out under the Creating A Faction section of the Kickstarter page.

Once again, thank you to everyone who has pledged. To make sure this game (and these books) are the best they can be, we would love it if you could share this project with your local gaming group or with any group you are involved with online. The more eyes that see The Genesys Project, the better it will be for all of us!