Sisters of Repentia are Revealed 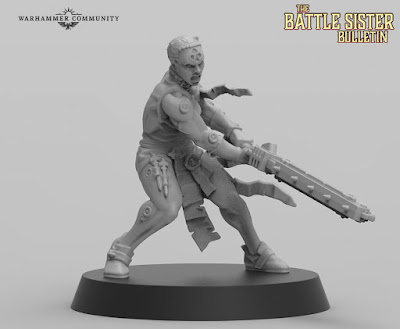 New Sisters of Battle Miniatures!!!!!!!! Sisters Repentia are here. Sisters have to be coming sometime near... Extremely dynamic models this time around full of action.


via the Warhammer Community
https://www.warhammer-community.com/2019/07/22/battle-sister-bulletin-part-12-repentgw-homepage-post-3/


We hope you’ve been loyal since our last Battle Sister Bulletin – it would be a shame if you had to REPENT! Well, that’s the fate that awaits the Sisters Repentia of the Orders Militant anyway, and being Warhammer 40,000, it’s a very grim fate indeed. But before we look at how these fearsome flagellants are shaping up, let’s quickly recap on what we know about them…

To the Adepta Sororitas, nothing is more important than their faith in the Emperor. Seriously – nothing! To that end, any perceived lapse in zeal or duty is punished severely. Repentia are Sororitas who have fallen short of their Order’s stringent code and now seek ultra-violent redemption by washing away their sins with the blood of heretics and unbelievers. Whether the result of harsh chastisement or even voluntary service after failing to live up to their own high standards, Sisters Repentia are ceremoniously deprived of their holy armour and wargear and formally cast out of their Order.
The only logical step from there is to charge into battle to kill the impure with enormous two-handed chainblades or seek retribution in death. After all, you can hardly call yourself a holy zealot in the 41st Millennium if you’re not prepared to get your hands (or in the case of the Repentia, penitent eviscerators) dirty!
Like the other Battle Sisters you’ve seen so far, the Citadel miniatures designers have taken the opportunity to revisit these frenzied warriors – this time as a multipart plastic kit, with all the dynamism and flexibility the medium provides. Now you know what the Sisters Repentia are about, let’s take a look at some of the work-in-progress designs. 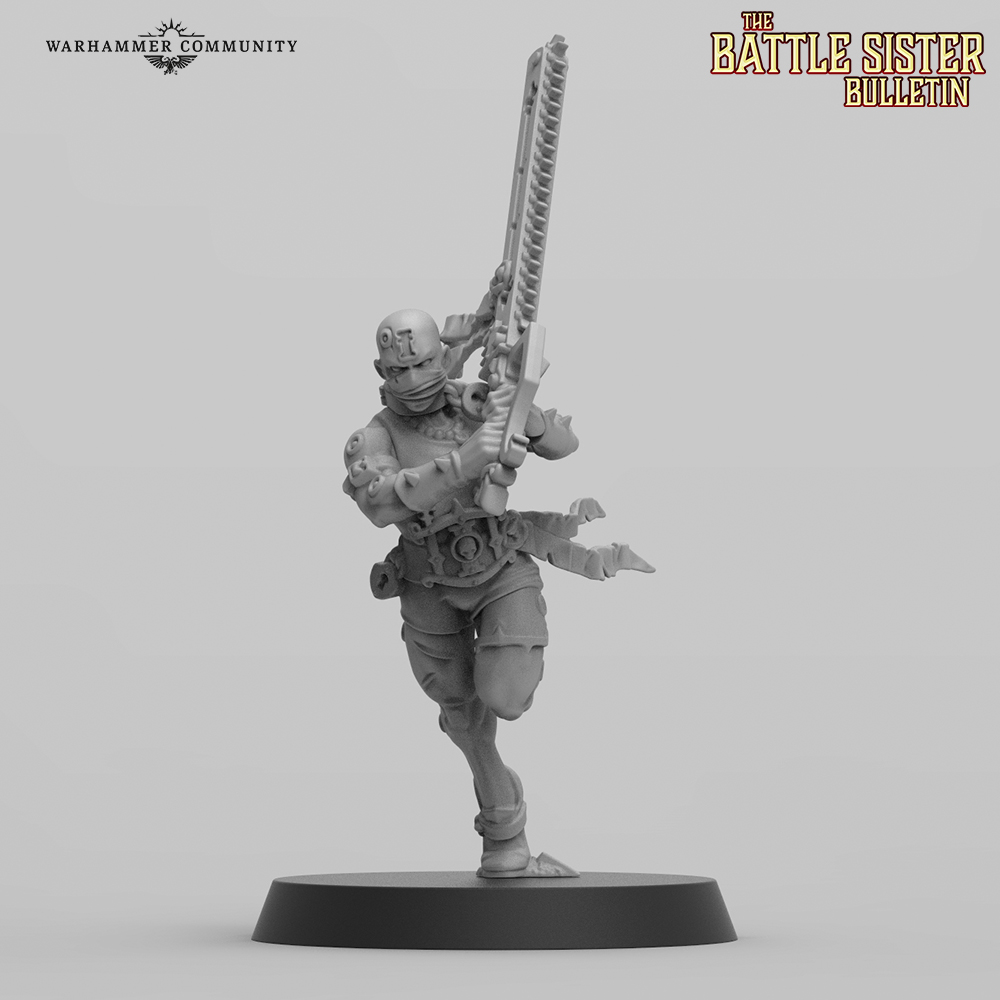 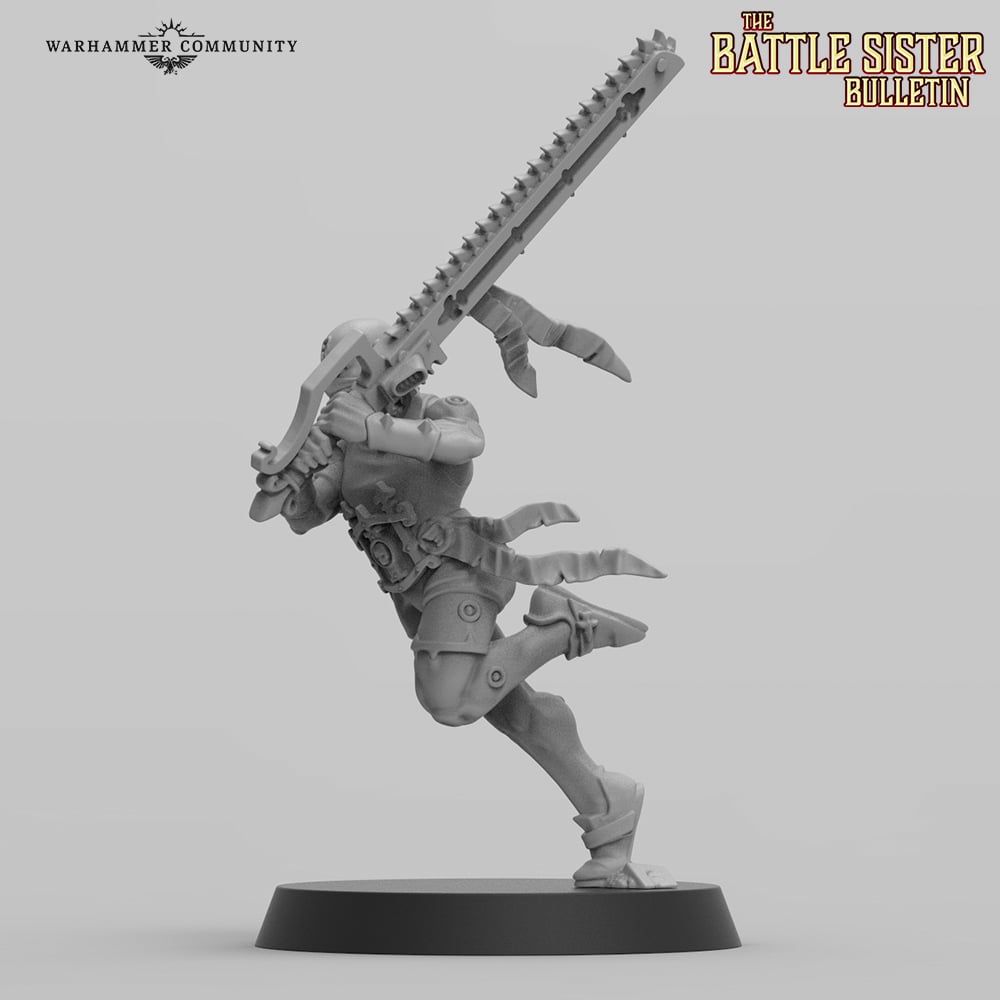 That’s how to commit to a charge! Bereft of armour, the Sister’s scalp is shorn and her forehead has been branded. Her mouth is bound shut, likely as a reminder of her punishment. Perhaps she spoke out of turn to one of her superiors or questioned her faith?
The Sisters Repentia designs feature some gorgeous details and incredibly dynamic poses, from the defined musculature that aptly demonstrates their physical prowess to the way that each Repentia is throwing her entire weight into the swing of her fearsome weapon. Such is definitely the case in our next example! Here we have a masked Repentia (reminiscent of other faithful seeking Redemption) who is fully committing to a massive swing with her penitent eviscerator – appropriate for a weapon that can split a Chaos Space Marine in half if the strike is true! 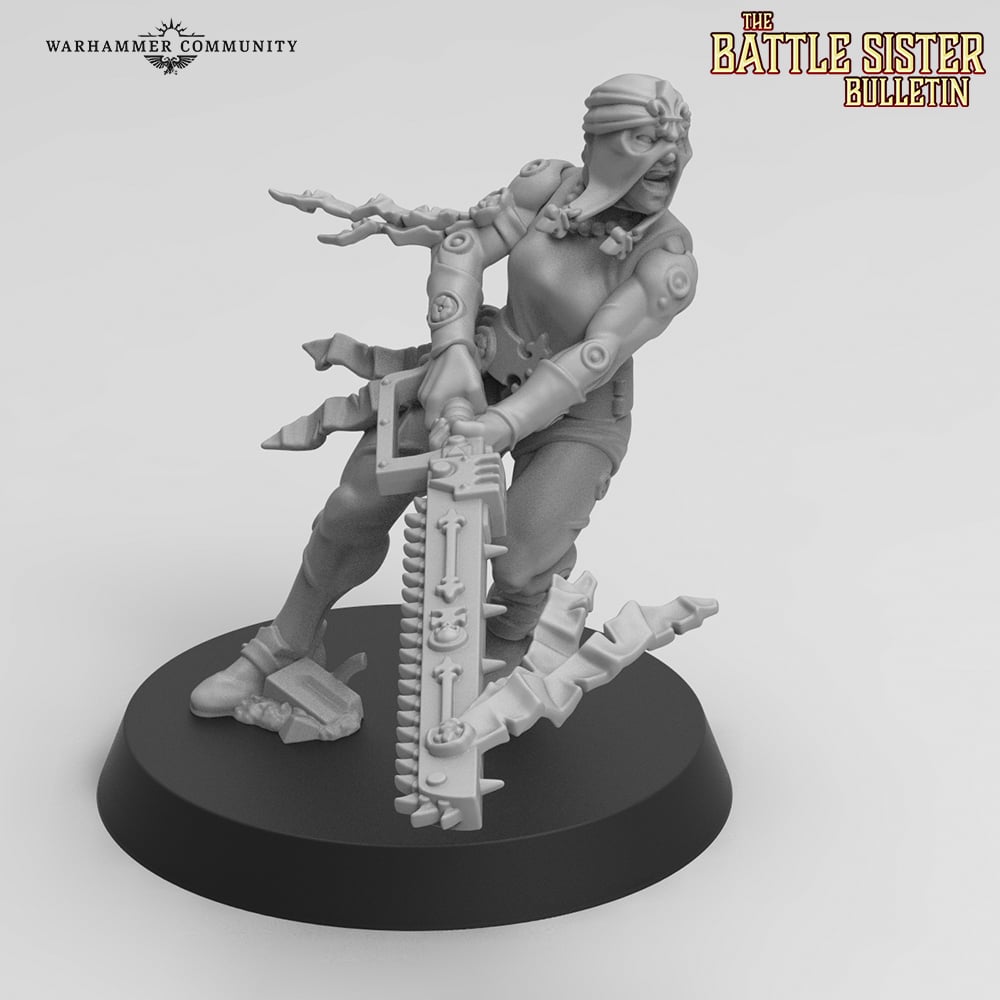 In this design, you can clearly see the exposed plug ports that would normally enable a Battle Sister’s muscles to work in tandem with the enhanced fibre bundle network within her power armour. The power armour worn by the Adepta Sororitas (and other agents of the Imperium, such as Inquisitors) doesn’t require the full interface of an Adeptus Astartes black carapace.
These next two examples nicely showcase the variety of poses that can will be achievable from the kit. One has just brought her chainblade down in a murderous chop, while the other’s eviscerator is at the apex of a backswing. Their crudely shaven hair implies that they’ve likely cut it themselves – or possibly even torn it out in clumps. 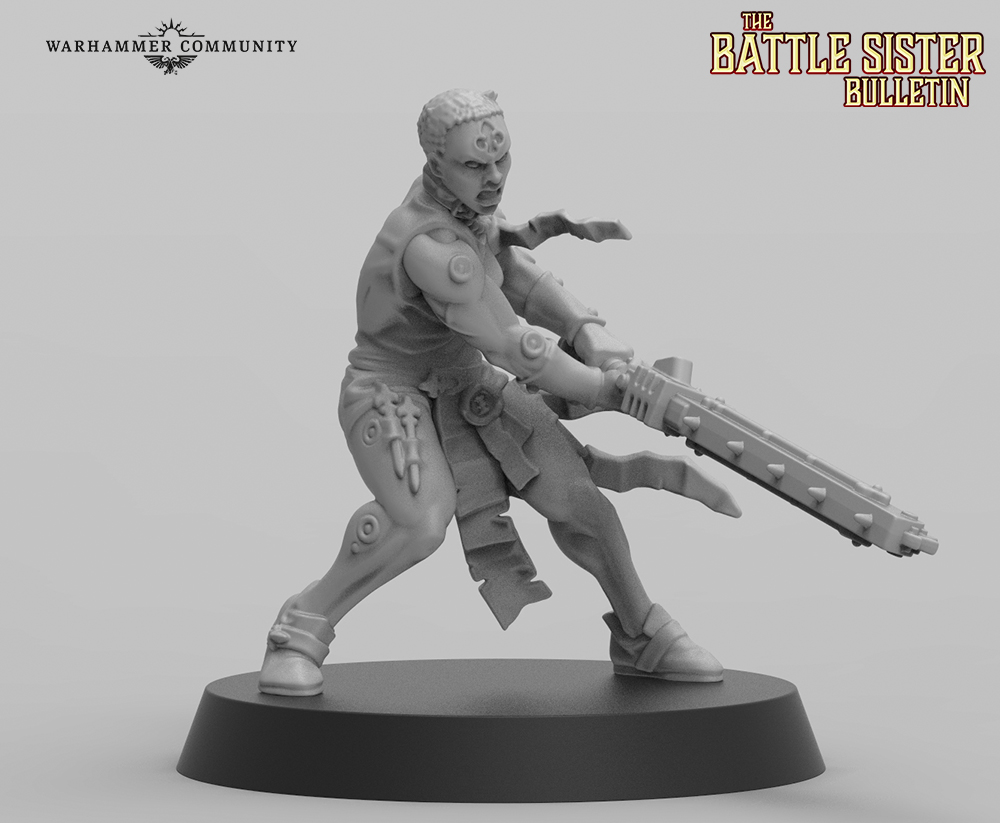 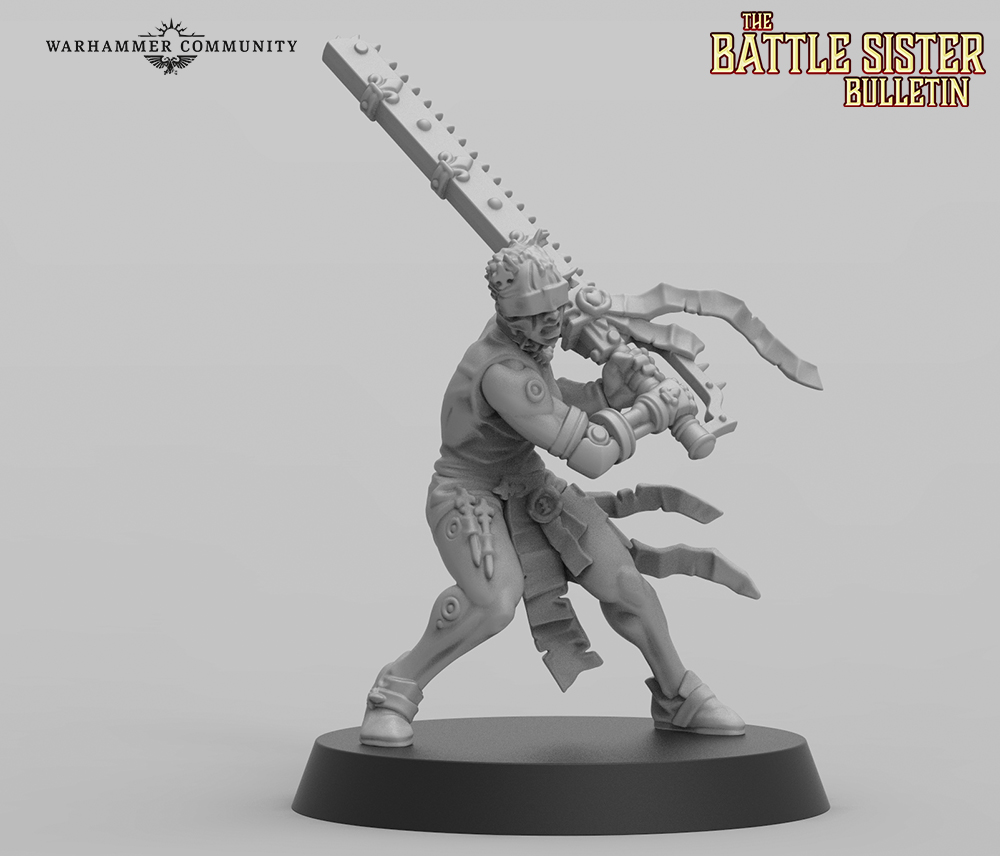 The scrolls and parchment that adorn the clothing and eviscerators of the Sisters Repentia would likely list the nature of their sins, serving as constant reminders of their penitent obligations. If their cruel fate isn’t reason enough for the other Adepta Sororitas to remain on the straight and narrow at all times, then I don’t know what is! If a Repentia succeeds in redeeming herself and rejoining her Order, she will be greatly revered by her fellow Battle Sisters for finding the strength to overcome her failings.
Did you know that Celestine, the Living Saint herself, was once a Sister Repentia before earning redemption? If not, then you should definitely give Andy Clark’s novel, Celestine, a read – you can pre-order it this weekend. In the meantime, be sure to pick up Our Martyred Lady by Gav Thorpe, which also features Celestine as well as a certain Inquisitor Greyfax (voiced by none other than Catherine Tate)! We’ll be back with another Battle Sister Bulletin in two weeks – see you then!