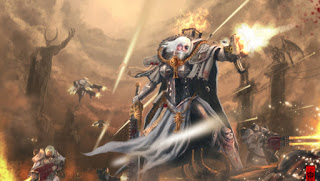 From an unusual source this time around, but letting us know that we will be seeing the Sisters of Battle sometime in August.

This seems logical, and I quoted Spikey Bits as well below that says around school time, which I am assuming he meant beginning of September. These are closely aligned but who knows.


These are rumors, and we know they are right around the corner.... the Rumors will come.....
I don't know how accurate either of these below are, but its what is being told to me for the bit sent to me here.

via anonymous sources on Faeit 212
thought you would want to know, next month will be sisters of battle. lots of surprises not yet revealed.

from last week at some point.
via Spikey Bits
https://spikeybits.com/2019/07/rumors-sisters-of-battle-releasing-sooner-than-we-thought.html
These ladies will be hitting shelves around back to school time.
7/15/2019
Natfka
Rumors, Sisters of Battle, Warhammer 40k