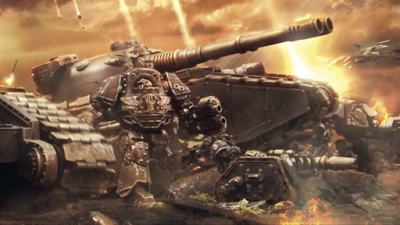 We have been told just earlier today that we will see the Horus Heresy box set October-ish. So exactly what other information out there is being talked about for this game! I already need this, so lets dig in.

Here is the latest on what is being said about a starter box set release. Please remember that these are rumors.

Updated with rumors from Lords of War Gaming
https://www.facebook.com/Lordsofwargaming/posts/795583223901791?notif_t=notify_me_page
Lords of War Gaming: It will have it's own rules created by GW, but everyone will use for FW and they should. 30k is vastly better than 40k.
It will be two legions that hate each other. Any guesses?

Devon Martinez: Word Bearers and Ultras are a classic duo.

Lords of War Gaming: Looks like we have a winner!

Here are the previously leaked Images of the sprues for this game
http://imgur.com/a/r8FRk


via Apologist on Warseer
http://www.warseer.com/forums/showthread.php?412928-Horus-Heresy-Plastics-in-late-2015-Mk-II&p=7523593&viewfull=1#post7523593
Can’t remember where it was in the old thread (or possibly another forum), but I believe it’s been rumoured that the box is themed around Phall, with Imperial Fists versus Iron Warriors.
I’ll see if I can dig out a link to where I saw that.
….
It is noted that the forces are asymmetrical; themed around a boarding party and defenders.


via Whisper of Truth on Dakka
http://www.dakkadakka.com/dakkaforum/posts/list/780/637550.page#8027110
… Also the contents rumours are slightly wrong. The forces aren’t an exact mirror of one another. One force is a Pride of the Legion style force. Some might even call it a boarding party… The other is based off normal Tac. Marines.

As for the ship name, I don’t think the game is based on this particular ship, but I’d go with the “Tribune.” Or one of the other warships in that warzone anyway.

I’mageek- “Imperial Fists, if it is set at Phall.”

“Ding ding, we have a winner.
If I remember rightly the box has around 44 models. Including 3 Mk4 boxes, Contemptors and Cataphracti, and the two characters.”

I sort of mentioned it before but the game will provide two legal armies out the box if you split with a friend, or one big one.

One built as Vets. and Cataphracti led by the Praetor. The other with two Tac. Squads as troops choices.

Not sure tbh. Any "tiles" or board included would be cardboard though. The idea of this new boxed game trend, yes trend there will be more, is based entirely on what made 3rd ed Space Hulk so successful. A bunch of models you can to your army and a "free" game included.


As for those asking if this is limited. Yes it is, the characters in the box specifically. Everything else will form part of a new range which is kicking off fully next year. There'll be 2-3 months of plastic 30k releases next year at the minimum. Mostly SM stuff, but more Mechanicum too. Most of the Mechanicum stuff that has been released already, you'll be able to use in 30k.


I initially heard the contents of the box would drop 6 months after it's general release. However, I'm beginning to think, in light of the recent AoS release, that we'll get a 2nd wave of Heresy stuff in 6 months, with the box contents dropping before then. That is purely speculation on my part though.
8/21/2015
Natfka
30k, Games Workshop, Horus Heresy, New Releases, News Headlines, Warhammer 40k