Updated: The Celestant Prime: Details about Next Week's White Dwarf... 83 Info is Here 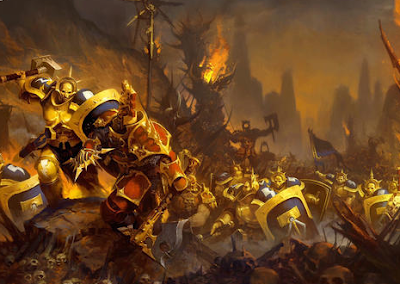 We have an early set of preview information for next week's White Dwarf, issue 83. The Celestant-Prime is on the cover with what sounds like a new large amazing model. Not only that, but next week's releases will include a new range of airbrush colours, 51 in total. We also have next week's hints!!!!!

This looks like we might be seeing the new winged models, (Prosecutors) for the Stormcast Eternals alongside the Celestant-Prime. The week after though......
"Death from the skies, A new Tome of Battle, Raise Shields."

Or it could mean that Prosecutors are the Death from the Skies. Yea, I am dying to know as much as the rest of you.

via anonymous sources on Faeit 212
With Angelic Wings he wields Ghal Maraz and floats above the large round base on a spiral of astral air. His wings are in a starburst pattern. Very nice and highly detailed model. from the other pictures it seems that his height matches that of the new bloodthirster.

The Celestant-Prime isn't Sigmar, He's the first Stormcast Eternal created and he's a special
character (rules say you can only include 1)

The title for issue 83 is
The Hammer of Sigmar
Wielding Ghal Maraz itself, the Celestant-Prime strikes like a comet!

Hints for the week after - Death from the skies, A new Tome of Battle,
Raise Shields.

Additional info
Also some more info about the airbrush colours. The 51 colours are from
the same range that we currently have not totally new colours. So calgar
blue, evil sunz scarlet, ulthuan grey etc. There's also a Caste Thinner