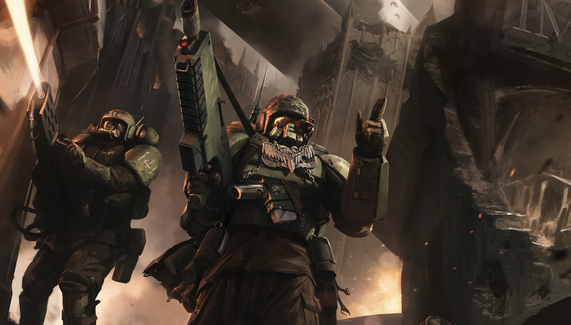 This one comes from a local redshirt, so take this with a lot of water to wash down the salt needed. However, we have been hearing several different versions of what is next, and we can now add this one to the list.

Please remember that this is a rumor. I do like the classification though of "redshirt rumors"

Updates via an anonymous source
I have been told the same thing from my rep about softback books as your "Redshirt Rumors" post. There is 1 thing i was told slightly different. Softback books are printed "in house" and that is why the can make money doing smaller runs.

Going foward anytime we see a new codex on the horizon, expect to see a softback printing if and only if the old book sells out to fast for GW. Currently Tau is the only one I've tried to order and have been told it is softback now.


via sunborn on Warseer
http://www.warseer.com/forums/showthread.php?413241-Astra-Militarum
Astra Militarum
I know this is little more than "my local redshirt told me", but my FLGS's GW sales rep pointed out that Astra Militarum's codex has gone softcover only, they will see a new codex soon. Apparently softcover runs can be smaller and still be profitable. Either way, GW is not selling an AM hardcover codex right now.

I don't like IG, but FLGS owner told me to not get my hopes up for Tzeentch Daemonkin because Tau and Astra Militarum are next. But like everyone knows, he has said he is in the dark as much as everyone until three days before the drop. So take this with all the salt needed. Is this old news?
8/29/2015
Natfka
40k, 7th Edition, Astra Militarum, Games Workshop, Rumors, Tau