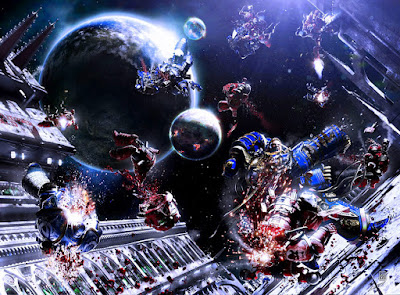 The stand alone Horus Heresy game that we have been hearing so much about in the rumors, is finally getting some solid answers. It's rumored to be released in October, but any real details on it have been slow to get. Rumors of it being a ship boarding game are being discounted at this point, and now we have the Legions involved....... Ultramarines vs Word Bearers.

Here is the latest.

Please remember that these are still rumors.

via Wintermute on Warseer
http://www.warseer.com/forums/showthread.php?412928-Horus-Heresy-Plastics-in-late-2015-Mk-II&p=7525269&viewfull=1#post7525269
As its called 'Horus Heresy: Battle for Ultramar' its unlikely its going to be a ship boarding game.

It is Ultramarines vs Word Barers.

According to my sources: the rules are not 8th Ed and they haven't been Sigmared simplified. The major difference is that the 'read this first' sections and the reference cards have simple to follow tables. For example the BS rule instead of being the traditional 'BS3 =4+' style in fact has the BS as '4+'. All other rules are as per 7th edition which will also be in the box.

No information about the minis in the box though.

question- Wintermute can you tell us (if you know and if you are allowed!) are the boxed set rules going to include unit/model rules JUST for the models in the box or will there be rules included for other models too? Or will these be released on an ad hoc basis in the future as "new" 30K figures are released?

I don't know but I can tell you there are no points values in the box its intended to be a stand alone game but it will teach the basics of 7th Ed.
8/26/2015
Natfka
40k, 7th Edition, Horus Heresy, New Releases, News Headlines, Rumors