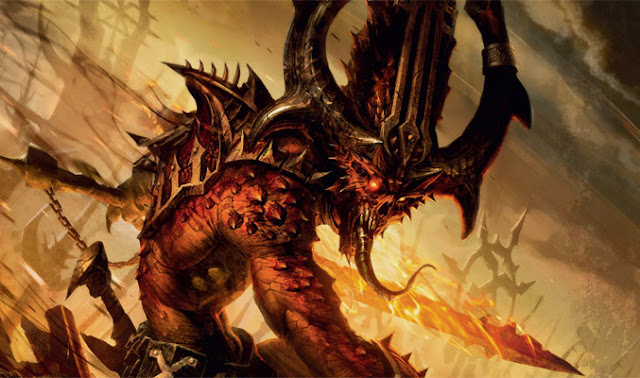 A new rumor is floating around now hinting at a Chaos codex coming soon. Along with it a new Daemon Engine would be a part of the release. It's been awful quiet for Warhammer 40k, and the expected next codex release is Tau. So this would be a nice shock to the system, but not out of the realm of possibility atm. Especially with all the Age of Sigmar releases. Perhaps some crossover on the models?


Please remember that these are rumors. The end of September for Chaos.... That would be cool.

via TheHairySorcerer20 on Bolter and Chainsword
http://www.bolterandchainsword.com/topic/312703-new-codex-chaos-space-marines/?p=4152941
So the manager at my local GW got back from Nottingham a while ago. And couldn't help but tell me theres talk of a new chaos codex coming this year at the HQ. I've known this guy for years. I've never been brought into the back of the shop and had him tell me. Then he mentioned horus heresy stuff in October apparently. I've scanned through the internet and found nothing on either. Although he seems like he really wants me to.expect something. I'll ask him for more info tomorrow. Not too excited. But he isnt a liar. And heck, he's coming to me about this as I'm essentially tge biggest chaos fanboy at tge shop.

I'll edit this post if some new info comes up. He said something about tau later in the year but I was too busy squabbling mindlessly about what could be changed. OH and apparently we are going to.be seeing a new deamon engine.. Joy.

He told me to keep £35 handy around the end of this month to the start of September. So it's just a matter of time I.suppose.
8/22/2015
Natfka
40k, 7th Edition, Chaos Daemons, News Headlines, Rumors, Warhammer 40k