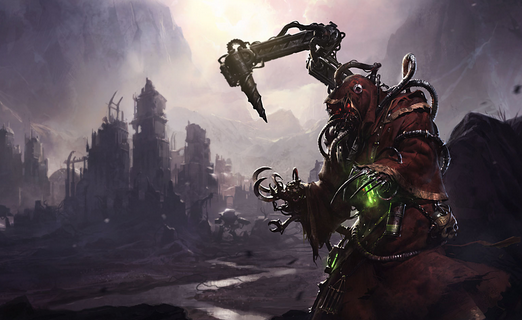 There has been a lot coming in, and while the salt level remains a little high for many readers, it was time to do a compilation. The Adeptus Mechanicus look to be coming, as there is a lot of details that we have seen so far.


Please remember that these are rumors, with more than a single source.

Adeptus Mechanicus
General
The new faction is in fact Ad Mech, Skitarii. As far as I know this is still a ways out, but who knows. There is only troops and elites, with vehicles. Mostly foot soldiers, guys with spider legs, and a couple tank/spider hybrids.

I have a little information for you on a new 40k Faction. Ive seen artwork of two soldiers in heavy but clunky grey body armour and helm, with one wielding an odd looking plasma pistol of sorts. The most striking thing about the image, with smoke and laser fire in the background, is the draping of the red cloth beneath the shoulder plating, and a symbol of the Adeptus Mechanicus on the main figures chest. All I will add right now is the book is 85pgs with datasheets and formations.

Weapons
the plasma pistol described in your previous article is not an odd looking plasma pistol. its an arc pistol. arc weapons will be available for the skitarii in both pistol and rifle. the arc rifle is rapid fire with haywire. rifle and pistol both are s6 ap5.

Cognis Weapons are normal weapons with the Cognis attached to it, like Cognis Lascannon. They simply use a BS 2 when firing snap shots because of an awakened machine spirit.

Burst Pistol rules allow for 5 shots to be fired instead of just a single one.

Galvanic Rifle looks like an ornate flintlock rifle with a canister on the side. R30", rapid fire, S4.

Onager Dunewalker
a heavy choice walker called a Onager Dunewalker will be part of the skitarii. they are an armor 12 walker that comes with overlapping forcefields that give an invulnerable save. each additional walker in the squad increases the save by 1. they come with a conversion beamer type weapon that is more powerful up close and disperses to a large but weaker blast at longer range. squadrons up to 3.

Dragoon Walker
There is also a Dragoon which looks to be a dual kit with a rider on top of a bipedal machine. It has legs similar to the IG sentinels, but has a grafted human in the center of the machine. I am not as fluent in the background with the skitarii as I would like to comment much more.

Ive seen a walker bearing the ad mech symbols on it. The walker has a horizontal pilot hooked up to the machine with optical lenses for the pilots sight, and little mechanical grabbers that extend out from the pilots hands. There is a gunner on top in red robes and odd looking armor that reminds me of the tempestus armor except for larger eye lenses. The walker has sentinel legs, and the weapon up top is a ornate twin-linked lascannon.
1/03/2015
Natfka
40k, 7th Edition, Adeptus Mechanicus, News Headlines, Rumors, Skitarii, Warhammer 40k