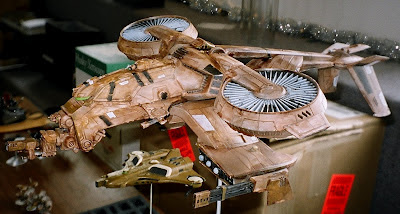 Tau seem to be all the rage this week in the rumor mill, and here is a few more little bits to add to that regarding Tau flyers and release dates.

Please note that the flyer above is a custom job done several years ago and is not any of the new models.
These are rumors, take with the appropriate amount of salt

via shaso_iceborn  on Warseer
I know my sources are "unreliable" at best, but I have been told to watch/start watching for information in March. Of course they still talk about the Mako as well as the Copperhead for flier names. My sources still say June for the release (last year they told me in April to expect a June release they did not say 2013 though) I have also heard the Hammerhead will receive a Swordfish option turret and be one of the first 4-in 1 tank kit boxes with an extra sprue added as well as a price increase. I usually stay silent anymore as people bash terribly but figured I would try to chime in once again.